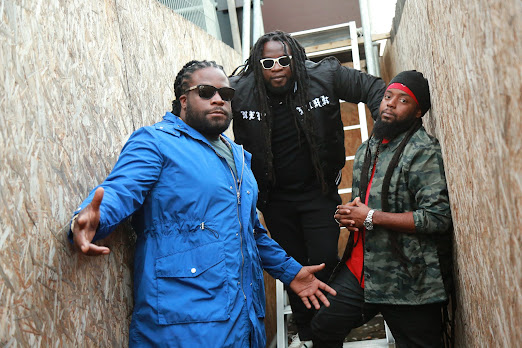 New York, NY (March 29th 2022). Morgan Heritage is backing their new hit single featuring Rytikal, Jahshi and I-Octane, with a thought-provoking music video. In this video, Morgan Heritage, takes the role of the journalist reading the news and social critique of the state. From exploring how violence in the music is being scapegoated, to thoughtful and timely storytelling, Morgan Heritage and their new young collaborators cast critical eye toward the current state of media. This official music video for this latest exciting saga in Morgan Heritage’s musical journey is scheduled to premiere March 29th on BET. The official video will be screened on BET Soul and BET Jams as the launch proceeds, with a permanent home on YouTube and BET’s website.
Morgan Heritage is known for their award-winning music, and massive singles like Don’t Haffi Dread, Down By The River, Tell Me How Come and Sunday Morning. Stellar albums like Grammy nominated Avrakadebra, Strictly Roots, which won for Grammys Best Reggae album in 2016 and most recently released Legacy, have helped to cement their space in Jamaican music history. Originally made up by five of Denroy Morgan’s very talented children, Morgan Heritage the band is now composed of Roy “Gramps” Morgan, Peter “Peetah” Morgan and Memmalatel “Mr. Mojo" Morgan who are considered The Trinity. The musical fabric of the group remains intact, and their latest single is proof.
With the discontent growing toward local and foreign media, this blazing new track, and spicy new video certainly hits a relatable note. Directed by the likes of Sasha (Bling Blang) & Morgan Heritage themselves, the video takes on a life of its own, while enhancing the experience of the single. The use of darker more cinematic tones and colors, gives the song an action cinematic quality that Jamaicans inherently love. The video manages all this excitement while maintaining the direction, intention, and message of the song throughout.
The loss of their dad Ras Denroy Morgan has enforced and propelled their mission of staying the course. “Telling his story and shedding light upon the stock in which we are from is our mission. Papa always advise us to stand for something unless you fall for anything. Headline Fi Front Page is the life of our people, Headline Fi Front Page is our lives” says Mr Mojo Morgan.
WATCH HERE
Stream Link
https://ingrv.es/headline-fi-front-y3t-s
Posted by Addiverbalist Kev at 21:36
Email ThisBlogThis!Share to TwitterShare to FacebookShare to Pinterest
Labels: Music, New Release, News, Video