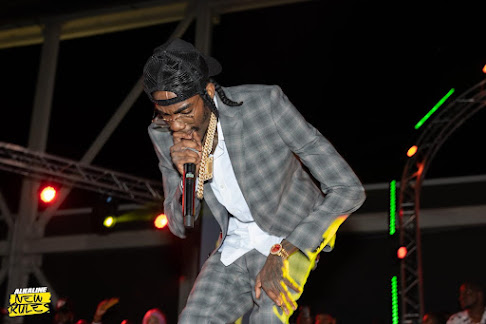 Miami, Florida (Shuzzr) – Undoubtedly the ‘’Youngest Lawd”, Alkaline The ManHimself, on March 27TH, 2022 at the Miramar Regional Amphitheater in Miami, Florida demonstrated not just his reign at the helm of the genre which he represents but gave fans and critics a fiery, and mature performance setting the stage of what can be expected in the coming months.

The return of Alkaline’s signature event, New Rules Festival staging after a 4-year hiatus due to the global pandemic, saw acts like Grammy-nominated artiste Wayne Wonder, Platinum & Gold selling artiste Kranium, Billboard charting artiste Dovey Magnum, and rising act 450Music performing for thousands. Fans were also treated to a surprise performance from Mavado who is no stranger to the New Rules Festival stage as he too reignited his alliance and stood in concert with Alkaline.

“Alkaline stood in profound strength and humility. Unleashing a slew of hits from his extensive catalog, he performed in unison with his band to an energetic audience while basking in high Vendetta energy. His formula remains undisputed, with him still holding the keys to the city” states Shuzzr, Alkaline’s Publicist.

Spotify recently named Alkaline the most played local artiste on the platform with the artiste account on other platforms such as Deezer, Pandora and Audiomack numbers rivaling his peers with corporate endorsements and label support behind them. This not only reaffirms his place in the genre but his ability to make the genre marketable in Jamaica and globally.

"I would like to thank all our sponsors, the team and artistes that performed. Yes, I know there has been a lot of inquiry about New Rules Jamaica, and we would like to let the Vendetta fans know that we will be announcing such details in the coming days but it’s looking like Summer 2022, plus other surprises of course", Kereena Beckford, Alkaline’s Manager further adds.

Since the start of 2022, Alkaline has released singles titled “World Domination” and “Weekend” to rave reviews, amassing thousands of views.

Posted by Addiverbalist Kev at 10:32
Email ThisBlogThis!Share to TwitterShare to FacebookShare to Pinterest
Labels: Event, News