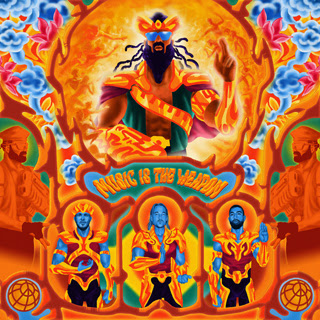 Music Is The Weapon continues to fulfill Major Lazer's goal of making the world smaller by making the party bigger. Coming five years after Peace Is The Mission and countless world tours—with stops in seldom-visited destinations including Pakistan, Cuba and Nigeria—Music Is The Weapon highlights the group’s thoroughly global approach.

The new album includes songs in five languages and features collaborations with a roster of emerging artists and superstars from around the globe whom the group has encountered on their travels. New York-born, Chilean artist Paloma Mami features on musico urbano track “QueLoQue,” Jamaican rising stars Sheensea and BEAM on "Tiny" and Indian producer Nucleya and vocalist Rashmeet Kaur on the desi bass track "Jadi Buti." Anitta returns to the group's fold on the Latin Grammy-nominated "Rave de Favela"—their 2017 collaboration "Sua Cara" was one of the first times the now-superstar was heard outside of her native Brazil.

Mr Eazi—who Lazer first collaborated with in 2017 and with whom they have toured Africa—joins fellow Nigerian K4mo and the legendary Nicki Minaj on the Afrobeat-inspired "Oh My Gawd." The previously-released, chart-topping “Que Calor” with J Balvin and El Alfa embraces the reggaeton and dembow that have made the two titans of Latin music worldwide—sounds that Major Lazer first explored in 2013 with "Watch Out For This (Bumaye)" with Busy Signal (the Jamaican superstar who is featured on the Soca track “Sun Comes Up” and with whom the band have been collaborating since their very earliest releases). The result is the ultimate showcase of Major Lazer’s ability to produce massive singles and highlight vibrant sounds from up and coming artists around the world.

Additionally, six Lazerism episodes launch on Spotify today that explore the album’s backstory, as well as lyric videos for each song on YouTube and Apple Music.

Major Lazer performed an exclusive DJ set on Twitch last night to celebrate the album release, marking the first time the trio played together from one location on a livestream—watch it HERE: https://www.twitch.tv/videos/778920909

This month the band are also playing a series of socially distant, drive-in Major Lazer Sound System shows in the US – dates and more info here: https://smarturl.it/MITWDriveInTour

Major Lazer is the global dance trio of Diplo, Walshy Fire and Ape Drums. Named for the group’s fictional figurehead, a one-armed Jamaican Zombie War commando, Major Lazer’s mission is to free the universe with music. The band has released three acclaimed albums, 2009’s Guns Don’t Kill People…Lazers Do, 2013’s Free The Universe and 2015’s Peace Is The Mission, featuring “Lean On” with DJ Snake and MØ—one of the most successful songs of all time.

Posted by Addiverbalist Kev at 14:37
Email ThisBlogThis!Share to TwitterShare to FacebookShare to Pinterest
Labels: Album