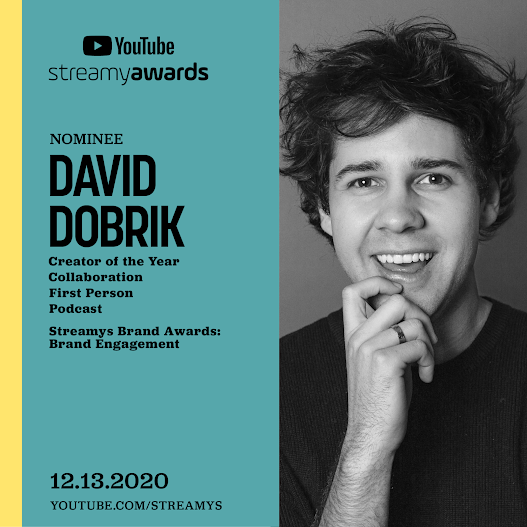 The nominees for the “2020 YouTube Streamy Awards,” announced (October 21, 2020) by dick clark productions (dcp) and Tubefilter, include those who found new ways to entertain audiences (D-Nice’s “Club Quarantine”), global celebrities earning their first nomination (Justin Bieber), rising stars with millions of followers (Addison Rae) and brands that put inclusivity first (Fenty Beauty by Rihanna). The event will stream exclusively on YouTube on Sunday, (December 13, 2020) at YouTube.com/Streamys.

This year’s Streamys will feature new honors in which past winners will craft unique and personal tributes to creators whose work has resonated with them personally. Other creators will be recognized for making impactful contributions throughout 2020 by pushing limits, inspiring connection in a year of isolation and influencing creative works and diverse voices across race, gender and culture.

2020 will also mark the Streamys 10th anniversary. This year’s nominations highlights include:

About the Streamy Awards

The Streamy Awards® honors excellence in online video and the creators behind it in over forty awards categories. Marking its 10th anniversary in 2020, the annual event is the foremost recognition by which online creators and their work is lauded. The Streamy Awards® is produced by dick clark productions and Tubefilter and is exclusively broadcast by YouTube.

In 2017, the Streamy Awards’ Social Good Awards were created to honor individuals and organizations who use online video and social media to amplify their message, and foster engagement and participation to make a greater, more meaningful impact. The Streamy Brand Awards, launched in 2018, spotlights brand advertising innovation, the creative individuals behind it, and the new wave of celebrities who are helping brands deliver their message.

Tubefilter is the most trusted and widely read source for YouTube and online video news, analysis, and events. its trade news and analysis, community events, and creator advocacy programs, Tubefilter has helped to foster the growth, promotion, and legitimization of a new, independent professional entertainment industry. Tubefilter properties include its flagship publication, Tubefilter News, the Tubefilter Charts, its popular YouTube Millionaires series, the Creator News weekly show on YouTube, and the Streamy Awards. For additional information, visit www.tubefilter.com

Launched in May 2005, YouTube’s mission is to give everyone a voice and show them the world. We believe that everyone deserves to have a voice, and that the world is a better place when we listen, share and build community through our stories. YouTube is a Google company.

Posted by Addiverbalist Kev at 12:25
Email ThisBlogThis!Share to TwitterShare to FacebookShare to Pinterest
Labels: Event, News