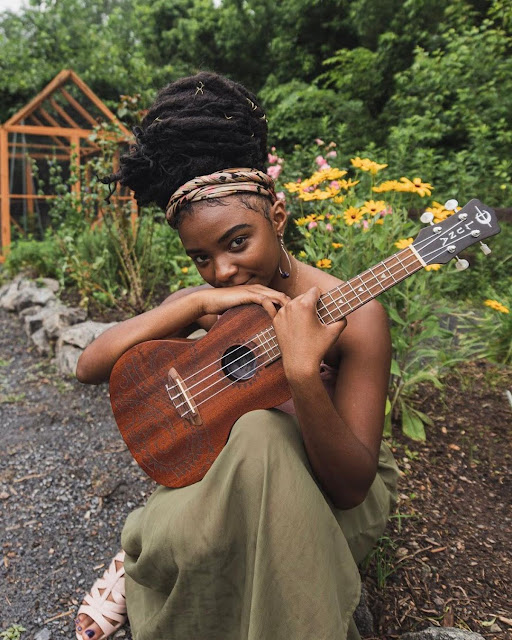 Ja’ness is a Singer/Songwriter/Guitarist. 21 years old and born and raised in Washington D.C. She first found love for music listening to some of the produced work from her Grandfather Joseph Tate. Janess likes Alternative Pop, Rock, R&B music. Her Favorite Artists are Alicia Keys, Hinder and Maroon 5. Her favorite songs are We Are Here by Alicia Keys, When I See You Again By Charlie Puth and Sugar by Maroon 5.

Pop singer Jeneesah Tate better known as “Ja‘ness” is prepared to take the world by storm with her soft voice, trendy style, and the sweet melodies that she plays on her guitar. This singer is along to doing great things with help of her family, fans and teammates that are able to support and encourage her spirit along her road to success.

When the multi-talented teen traveled to New York, she was there to make a debut as an upcoming singer/songwriter. Ja‘ness auditioned for the Apollo Theatre on Amateur night. She described her experience auditioning as amazing. “That was my first time doing something like that, and having the experience of getting a number and having my number being called… it was lots of fun being near people in the same position as me. “She is along to doing great things. Coming from a long lineage of musical talent, Ja’ness interest in music and instruments played by close family members. Soon she began singing and developing her own music style. It did not take long until she began her interest in the guitar.

Her interest in guitar started when she first began homeschooling around the age of 12. It was inspired by her grandfather, a local musician in the DC area. As her interest in music grew, Ja‘ness was receiving guitar lessons from local guitarist and has even received mentoring from the late mission Al Johnson. However it wasn’t that easy when she first started out. She later explains.

“It was very hard learning to read the music. Then you went on to chord progression and you learned how to match chords and make music sound good. And that was how I was able to create my first song on the guitar called rainbow. And after that I got better, playing faster and making new songs and playing new chords and then I finally got a teacher after that and he gave me a book that helped me improve my guitar playing” Ja‘ness has been a huge success with producing her music ever since. Ja’ness has also mentioned how singers such as Alicia Keys and Whitney Houston has had a huge impact on her and her music style.

During her audition, the singer serenaded the judges with the song we are here by Alicia Keys followed by her soul sister by Train along with playing her guitar.

Ja‘ness has done other gigs as well. Ja‘ness is the vocal department and show choir in her school, Duke Ellington School of  The Arts along with several other students. In the vocal department, Ja‘nessis taught theatre, acting, and how to sing in many languages. Her group often gets request to perform shows by churches, office buildings and businesses of all sorts. Ja‘ness is currently making frequent trips to the recording studio, were she produces her music.

Set aside her busy schedule, this teenager still likes to have fun. When she’s not in rehearsal, she’s either going to dance practices, practicing her singing or hanging out with some close friends. There is never a dull moment. Ja‘ness has huge plans for her future but for now she is focusing on expanding her brand and improving her music while being a full time student.

Posted by Addiverbalist Kev at 15:35
Email ThisBlogThis!Share to TwitterShare to FacebookShare to Pinterest
Labels: Biography