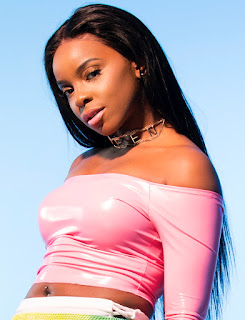 Dancehall's newest princesss.
Creating her own lane and turning up the heat!

Fun Fact: Khalia is her real name; an Arabic name that means 'Immortal and everlasting'.
Ironically that's a legacy Khalia is determined on building.

Jamaican born, London bred, she found her way back home through the love of music where she became the first signed act of K-Licious Music. Owned by Grammy award winning producer Tony "CD" Kelly.
Khalia grew up in Westmoreland, Jamaica (A deep rural countryside) until 6 years old, when she migrated to London with her mother. She spent the most part of her life there while visiting her family in Jamaica every year.
In 2016 Khalia met Shaggy and sent him some of her music she had recorded. After listening, he was impressed with her talent told her he knew the perfect producer to bring her sound to the next level.
Once Tony Kelly and Khalia met at his studio in Kingston Jamaica, they recorded a demo the same day and have been working together ever since.

Khalia's first single Ride Up; (which has over 230,000 streams on Apple Music and Spotify) has had rave reviews on the captivating content and the visuals for the official music video.
And one of her more recent releases, "OneDance" with I-Octane, both the audio & the visual, is gaining momentum rather quickly with fans all over the world. With Phrases like “Infectious”, “Best song in years”, “ I've been playing this song for days and I still can’t get enough” to ”You make me want to dance again” to tell of their deep pleasure into this masterpiece. One Dance has also entered charts and playlists in Japan, Australia, Kenya and the UK, showing that Khalia clearly has an international appeal.

Khalia's newest release is her own take on the iconic 'Bookshelf' riddim produced by Tony "CD" Kelly in 1998. to celebrate it's 20th year anniversary, an updated version has been made and Khalia's new track "My Name" sits beautifully on it. The video features cameos from Beenie Man and Tanto Metro & Devonte, who both had songs on the original riddim.
It has become an instant fave for many who hear!
Her fusion style and vocal talent has also attracted some of the industry heavy weights. Khalia has secured collaborations with artists such as Ghanaian BET award winner Stonebwoy, Shaggy, a collaboration with Busy Signal on the "Badda" track taken from the Caramel Ice Cream Riddim, and Tifa to name but a few..
Khalia also featured on the NightlyFix interview where she discussed growing up in the UK with Jamaican roots, working with iconic dancehall producer Tony “CD” Kelly and how she landed collaborations with Busy Signal and TIFA.

The future of Khalia is BIG.
Khalia will bring her brand to 'Superstar Status'
She understands the power of music and its influence, so Khalia is always looking to impact positively with anything she releases. From her music, videos and even down to her instagram posts.
Reaching this level is especially important to Khalia as she has a passion for giving back. She has already started by fundraising for Content Primary School in Westmorland, Jamaica; to update their learning environment and have them prepared for the future of technology by providing them with computers and lessons.
To be the leader of the new generation through entertainment. That is the goal.


Khalia's social following is growing everyday. She now has 40,000 followers on Instagram and over 50,000 on Facebook. The fans she gains are genuinely supportive and rooting for her, making them ever so valuable.
More music and videos are also available on Khalia's Youtube channel by clicking the links below.

Posted by Addiverbalist Kev at 12:08
Email ThisBlogThis!Share to TwitterShare to FacebookShare to Pinterest
Labels: Biography