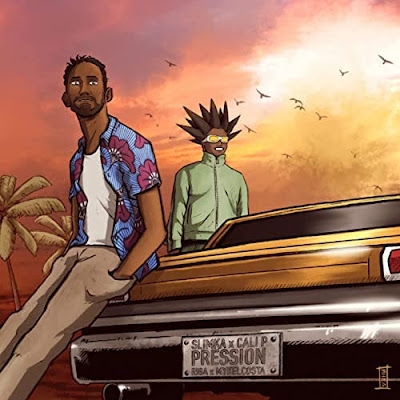 “Pression” is the first of a series of collaborations which will be releasing over the next few months by Swiss Beatmaker / Comnposer RIGA (who has collaborated amongst others with STONEBWOY (Ghana), VYBZ KARTEL (Jamaica), MAJOR LAZER (USA), JUGGLERZ (Germany) and more.

Over the past 15 years, RIGA was also managing and booking various artists, his work led him to travel the world with the artists he was collaborating with, Going From Los Angeles to London, passing through New York, Las Vegas, Jamaica, Costa Rica, Ghana and all over Europe. This permitted him to build an impressive independent network with local and international actors of the music industry.

The Pandemic forced him to go back and put his focus in the studio, which led to creating several collaborative tracks with a bunch of artists from all over Switzerland and abroad: for the first single, he reunited 3 other heavyweights of the Swiss music scene: SLIMKA, CALI P and MYKEL COSTA.

SLIMKA is without a doubt the Swiss “Revelation” of 2021, his debut album “Tunnel Vizion” was amongst the biggest independent streaming projects in France the week of it’s release (very rare for a non-french artist). Next, there is CALI P, the international reggae – dancehall artist based in Zurich, who regularly sings in English, but decided to go with a French verse on this track due to the great feedback he got from French verse on his last release “Ayen Pa Chanjé”.

The instrumental itself was made in collaboration with another Swiss music Giant : MYKEL COSTA – who is without a doubt one of the most prolific producers hailing from Zurich, with collabs and features on most of the Swiss urban projects at the moment (STRESS, EAZ, DANITSA, NAOMI LAREINE, etc..).

The 4 of them connected during the first confinement and spent several days locked up in a Big Chalet in the middle of the Swiss alps, during which several songs were created, including “Pression”.

The track is a mix of various influences: Drill, Trap, with a heavy bass mixed with the same codes as reggae and dancehall – creating an intense musical experience filled with energy!