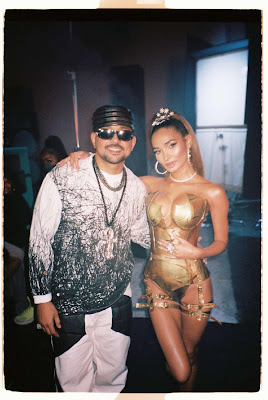 Of the release, Sean shared “This new single “How We Do It” is our way to show the listeners, how we dance, how we enjoy life, and how we stay fresh. Big up to Pia Mia, when we started recording this track we knew right away we wanted her on this single and she hit it out the park.”
The track pops off as an international anthem. Its energy dips in and out of island-inflected dancehall beats, slick R&B, and swaggering pop. Sean Paul leans into the production with a smooth and slick flow before multiplatinum artist, actress, and presence Pia Mia counters with an instantly unforgettable chorus. The accompanying visual, directed by Briana Gonzales, seamlessly translates this vibe to the screen as their chemistry instantly sizzles. Bathed in colorful spotlights, a gang of dancers surrounds Sean Paul and Pia Mia in a shallow pool. As water splashes, one showstopping dance routine after another transfixes. It notably serves as a reunion since Sean Paul appeared on the remix of Pia Mia’s “Hot” two years ago. Once again, he has ignited a genre-breaking global banger of epic proportions.
Most importantly, it sets the stage for more music and surprises from Sean Paul in 2022. For now, rock to “How We Do It!”
Meanwhile, his single “Dynamite” ft. Sia has eclipsed 26.8 million Spotify streams and 6 million YouTube views on the futuristic music video.  “Dynamite” marked a highly anticipated follow-up collaboration between the genre-bending artists since their smash hit “Cheap Thrills,” also produced by Greg Kurstin, which has generated over 1.6 billion YouTube views since its 2016 release.
LISTEN & WATCH “DYNAMITE” HERE.
Sean recently earned a GRAMMY nomination for Best Reggae Album for his 7th studio album Live N Livin, which was released earlier this year. The album is a collaborative celebration of his Jamaican heritage and dancehall roots in which Sean trades the mic with Buju Banton and Damian Marley. Dancehall can be stereotyped as a competitive, macho space where sound clashes are king, but Live N Livin set out to emphasize what’s possible when unity is the goal. “We don’t need to divide our fans to attain the rotations on the airwaves or streams,” Sean says. “I hold this album very dear to my heart because it shows the effort of collaboration over confrontation.”
Last week, Sean announced 2022 U.S. Scorcha tour dates that will include features from his 8th studio album set to release later in the year. Returning to the stage following two years since touring due to the pandemic, he is eager and excited to reconnect with his fans live and in person. See full tour routing below.
Throughout his career, the international superstar has carved a home for himself while championing dancehall, as being an artist with a unique sound, look and passion. His ability to show the power and unity in music through various collaborations, across many genres has catapulted his career over the years on various charts, awards and with an enormous fanbase. Effectively Sean has brought that same concept back to his own genre and collaborated with some of his colleagues in reggae and dancehall, highlighting that together we can also make great music.
Stay tuned for more from Sean Paul soon.
Sean Paul U.S. Dates:
03/11/22 Tampa Florida –                     Busch Gardens Tampa Bay
04/22/22 Boston Massachusetts –         House of Blues (Boston)
04/25/22 Brooklyn New York –            Elsewhere
04/26/22 Brooklyn New York –            Elsewhere
05/14/22 Las Vegas NV –                      Lovers & Friends
05/15/22 Las Vegas NV –                      Lovers & Friends
05/27/22 Los Angeles California –       The Novo
05/29/22 Monterey California –            Monterey Fairgrounds
About Sean Paul
It’s rare for an artist to become the personification of their genre. For just a word or phrase from their mouth to conjure the entire artform. Sean Paul is one of those artists. Let him say “shake dat ting” in his commanding voice, and you’ll hear the embodiment of dancehall. Across seven studio albums and counting, Sean Paul has taken the genre global, from its origin in clubs in Kingston, Jamaica to the top of the charts, packing some of the biggest venues in more than 120 countries. Only Sean has the distinction of being the first Jamaican to play shows in Kazakhstan and Madagascar.
The Grammy Award-winning, international superstar has ignited stages in over 120 other countries, performing for huge audiences in some of the biggest venues around the world. Sean Paul has earned several Grammy and Billboard Music Award nominations and is the recipient of an American Music Award, MOBO Awards, Soul Train Awards, MTV Music Awards, ASCAP Rhythm and Soul Music Awards, a Source Award and a BET Award. He is the only Jamaican artist to have won an American Music Award (2006) for Favorite Pop/Rock Male artist.
Sean Paul Socials:
INSTAGRAM | TWITTER  | FACEBOOK | TIK TOK
Posted by Addiverbalist Kev at 13:56
Email ThisBlogThis!Share to TwitterShare to FacebookShare to Pinterest
Labels: Music, New Release, News, Video