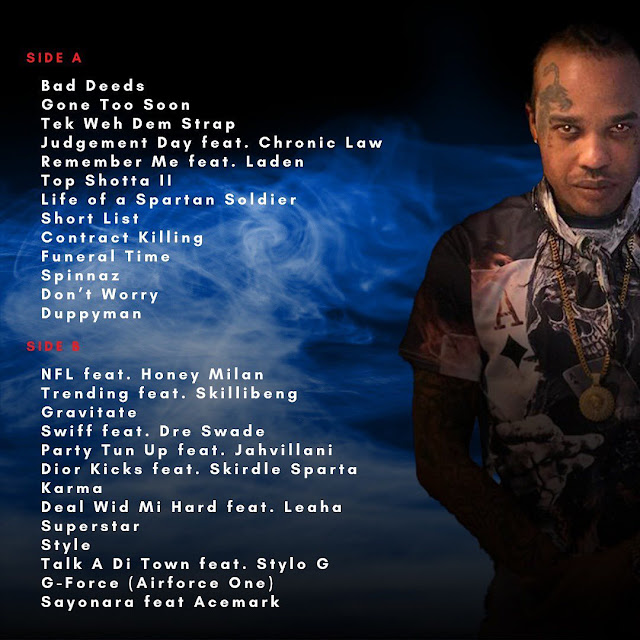 The controversial Montego Bay artist is presently incarcerated as he serves a three-year sentence for illegal possession of a firearm and illegal possession of ammunition. Despite that, the artiste who released several gripping projects before like “Uncle Demon,” “Reincarnation,” “Grim Reaper,” “Psycho,” and “Sparta Boss” is set to release another dark project for his fans.

Tommy Lee Sparta‘s team describes the project as a continuation of his “dark operatic dancehall theatre” with his latest body of work.

The album will explore two different tones, according to his team, with one depicting a carefree, party-filled lifestyle tied together while the other will feature the gritty, raw depiction of society in a way that Tommy Lee Sparta has mastered to show the things that happen.

The album will feature 26 tracks, and some are collaborations with some of the hottest names in dancehall presently, such as Skillibeng, Chronic Law, Laden, Stylo G, Jahvillani, and Leaha.

Tommy Lee got his “buss” as an artist in 2008 after the premiere of his first single, “Spartan Story,” and became popular as an opening act for Vybz Kartel, among others.

He is managed by Boss Lady Muzik, who says the artist “distinguishes himself from his peers by tapping into and allowing himself to be inspired by the phoenix and its story of rebirth. In many myths and legends across the world, the phoenix is a bird of fire that is rekindled and born again from the ashes of its own flaming death. It is a symbol of humankind’s atonement with the concept of death and the acceptance that it is merely a passage into another state,’ a release from the label said.

It added that “in the same way, Tommy Lee Sparta hopes to Transition into a different space in his current life, with more of a focus on his core brand and the more positive things he’s known for.”