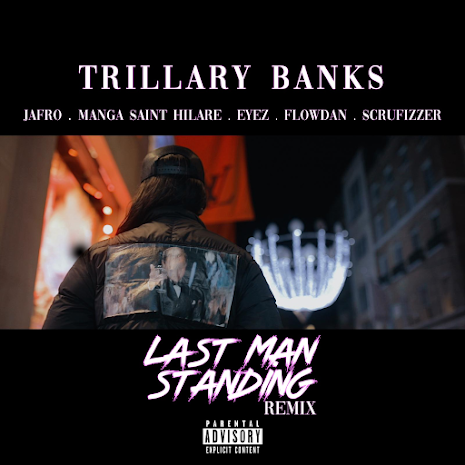 After the great reception to 'Last man standing' Trillary Banks has enlisted some grime royalty for what promises to be one of the most epic remixes of the year. Trillary is joined by a heavyweight lineup consisting of Scrufizzer, Jafro, Manga, Eyez and Flowdan who all respectively bring their A game.

Last man standing was premiered by dj Target, featured in the Spotify 'Grime shutdown' playlist as well as being playlisted to kish fresh.

Trillary Banks and Shadow previously collaborated on ‘Rip Aunty Nolay' which was released in Nov 2020 and went viral.

the remix is available to stream now via all popular dsp's

Be sure to follow Trillary Banks and the featured mc's on social media.

Posted by Addiverbalist Kev at 22:22
Email ThisBlogThis!Share to TwitterShare to FacebookShare to Pinterest
Labels: Music, News