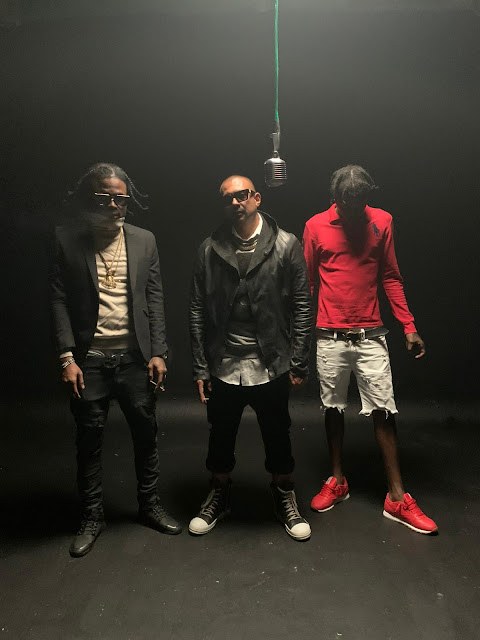 New York, NY, April 16th 2021. Coming on the heels of the release of his seventh studio album, ‘Live N Livin’, Sean Paul is ready to release the visuals for one of his tracks “Everest” featuring dancehall artistes Masicka and Skillibeng.

Directed by Kieran Khan Productions, Everest was shot in Kingston, Jamaica and signifies the collaboration over confrontation undertone, which Sean Paul exudes throughout this album.
Throughout his career, Sean Paul has carved a home for himself while championing dancehall, as being an artiste with a unique sound, look and passion. His ability to show the power and unity in music through various collaborations, across many genres has catapulted his career over the years on various charts, awards and with an enormous fanbase. Effectively Sean has brought that same concept back to his own genre and collaborated with some of his colleagues in reggae and dancehall, highlighting that together we can also make great music.
“As the great Capleton says, music is a mission, not a competition. I believe we should use music to make a joyful noise unto the Lord. The division in our genre, many times is senseless. We are all here to entertain our fans, provide for our loved ones and live a good life. Together we can be so much more powerful if we collaborate, instead of segregating ourselves and our crews. Everest is a perfect example of that, big up Demarco the producer, Masicka and Skillibeng for executing this one with me,” says Sean Paul.
Throughout the video you can see the three artists equally step up to the microphone to ‘spit’ their lyrical verse in a unified battle. The battle is not whose crew is better or which artiste has more numbers but instead each artiste bringing his best forward to make the track a success. The video premieres on FADER on Friday, April 16 and subsequently Sean Paul’s Vevo.
Sean Paul is currently gearing up for his virtual Dreamstage performance on Saturday, May 8 live from Jamaica.
ABOUT SEAN PAUL
Sean Paul Henriques (born January 9, 1973), who performs under stage name Sean Paul, is a Jamaican Grammy winning reggae artist. Sean Paul broke through with "Gimme The Light," the first single from his 2002 album Dutty Rock, which peaked at No. 7 on the Billboard Hot 100. Paul won his first GRAMMY for Best Reggae Album for Dutty Rock for 2003, the same year he was nominated for Best New Artiste. To date he has released six studio albums including, The Trinity, 2005; which was certified platinum in Europe and by the Recording Industry Association of America. He also went on to release Imperial Blaze, 2009; Tomahawk Technique, 2012 and Full Frequency in 2014.
ABOUT LIVE N LIVIN
The Grammy® Award-winning philanthropist Sean Paul released his seventh studio album –Live N Livin- on all platforms in March. Live N Livin is produced by Dutty Rock Productions and distributed by ONErpm. Live N Livin features collaborations from 22 reggae and dancehall powerhouses. The 16-track album was produced with a “collaboration over confrontation” undertone.
Album Tracklist
1.     Buss A Bubble Remix - Sean Paul ft. Sotto Bless, Looga Man, Ras Ajai, Chi Ching
Ching
2.     Boom - Sean Paul Ft. Busy Signal
3.     Space Ship – Sean Paul ft Suku Ward
4.     Real Steel – Sean Paul ft. Intence
5.     The Plug – Sean Paul feat Chi Ching Ching
6.     Dem Nuh Ready Yet – Sean Paul feat Left Side
7.     Crazy – Sean Paul Ft Buju Banton
8.     Schedule – Sean Paul ft Jr. Gong, Chi Ching Ching
9.     Money Bags  Sean Paul ft. Govana
10.  Protect Me – Sean Paul ft. Serani
11.  Lion Heart – Sean Paul
12.  Guns of Navarone – Sean Paul ft. Jesse Royal, Mutabaruka & Stonebwoy (Remix)
13.  Danger Zone – Sean Paul ft. Bugle, Scotto Bless
14.  Life We Livin – Sean Paul feat Squash
15.  I'm Sanctify – Sean Paul feat. Mavado & Agent Sasco (Remix)
16.  Everest – Sean Paul ft. Masicka and Skillibeng
To pre-save 'Live N Livin' album, please visit - https://ffm.to/livenlivin.
About Sean Paul
Sean Paul emerged on the Dancehall music scene in the early 1990s and has released a total of six studio albums. He also won the Grammies for the Best Reggae Album and five other Grammy nominations, one of which was for Best New Artiste in 2003 and the other for Best Pop Duo for the Cheap Thrills track, a collaboration with Sia. He has also received awards from several bodies, with 19 of his songs certified gold and several which have sold platinum, including the chart-topping single “Get Busy”.
Posted by Addiverbalist Kev at 07:38
Email ThisBlogThis!Share to TwitterShare to FacebookShare to Pinterest
Labels: Video