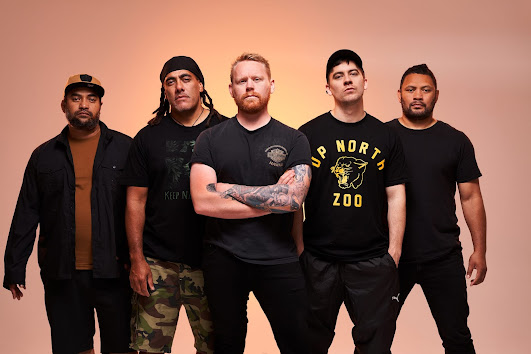 In just five short years, L.A.B have grown into one of the most-popular and busiest acts in New Zealand music. An eclectic mix of reggae, electronic, blues & funk all combine to create a sound entirely their own. Since their inception, L.A.B have performed at almost every major festival across NZ, alongside multiple sold-out headline tours of Australia.

The L.A.B. sound is one which has seen them become a favourite on the live circuit – trademark Kora grooves combining with Adams-Tamatea’s reggae/dub experience, and Shadbolt’s blues roots to create a sound entirely their own. The result is an eclectic mix of reggae, electronic, blues, funk, and reggae. Since their inception, L.A.B have performed at almost every major festival across NZ, alongside multiple sold-out headline tours of Australia.

Released in November 2017, L.A.B’s self-titled debut showcased the multiple sides to the L.A.B sound. Upon its release, the album went straight to number one on the iTunes Album Charts, has spent over 100 weeks in the New Zealand Top 20 Album charts since release, and has been certified Platinum. The single ‘Controller’ has since become a modern NZ anthem, being certified Platinum nearly three years after its initial release.

Not willing to waste any time, the band were back in the studio less than four months after their debut’s release, with the new album L.A.B. II, released just in time for summer. The second album is, as the title suggests, the second chapter in the L.A.B story, seeing a further 12 genre-bending tracks, and showing a band further honing their eclectic sound. Since release, the album has spent over 80 weeks in the New Zealand Top 20 Album charts, and has also been certified Gold.

Summer 2019 saw the band perform over a dozen shows including massive festival slots at One Love and Rhythm & Vines, alongside a debut headline tour of Australia, which saw five of six shows sold out. December 2019 saw the band fulfil its goal of releasing three albums in three years, with the release of L.A.B. III. The album has seen L.A.B become exposed to a growing audience, with the album reaching number five on the Official NZ Top 40 Album Chart upon release, and being named as a finalist for the prestigious Taite Music Prize for 2020.

Early 2020 saw the single ‘In The Air’ begin to take hold across New Zealand, fast becoming one of the songs of summer, resulting in the track hitting number one on the Official NZ Top 40 Singles Chart. The number one spot culminated a massive climb for the single which also saw it sit atop the RadioScope 100 Airplay Chart as the most-played song on NZ radio for over 15 weeks.

'In The Air' is the first independent local release to reach number one on the main chart since Flight Of The Conchords' 'Feel Inside (And Stuff Like That)' in 2012, and the first overall since Lorde's 'Green Light' in 2017. The track reached number one after 10 weeks climbing the charts, been certified four-times Platinum, and announced as a finalist for the 2020 APRA Silver Scroll Award, widely considered the most-prestigious accolade in New Zealand music. It finished 2020 by reaching Number One on the 2020 NZ Official End Of Year Singles Chart.

After COVID19 resulted in L.A.B’s longest break from the stage since their inception, they returned in a big way, performing the world’s first arena shows in over three months at Auckland’s Spark Arena & Hamilton’s Claudelands Arena.

“The L.A.B show on Friday was up there with the best of them; a sold out gig, an audience that departed hot and sweaty with huge smiles on their faces, and a production as good as any overseas act playing at this level,” – Stuart Clumpas, Live Nation New Zealand Chairman

Arriving just prior to the end of 2020, L.A.B IV maintains the sound that has become L.A.B’s trademark - reggae, funk, soul & blues effortlessly combining. Single ‘Why Oh Why’ showed the anticipation for the release, with the single debuting at Number One on the Official NZ Top 40 Singles Chart. The single is L.A.B’s second Number One for 2020, and marks only the second time an independent artist has secured two Number One singles in a calendar year. ‘Why Oh Why’ charted at Number One with ‘In The Air’ at Number Two and ‘Controller’ at Number Three, the first time an artist has had three singles charting inside the Top Five.

2021 will also see the band return to Australia for their second headline tour, which has seen the band sell out all five shows on the tour well in advance. With a total of 15,000 tickets sold, the global demand for L.A.B is growing, with this being the most amount of tickets sold for an act in Australia since March 2020.

Posted by Addiverbalist Kev at 17:53
Email ThisBlogThis!Share to TwitterShare to FacebookShare to Pinterest
Labels: Biography