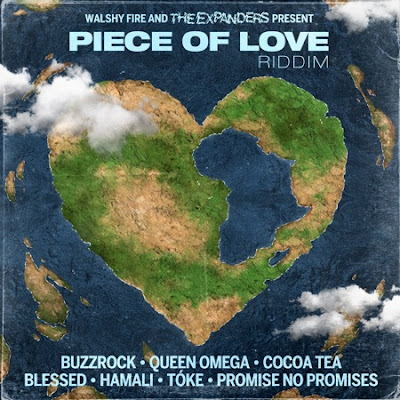 Walshy Fire & The Expanders are set to drop the highly anticipated reggae riddim titled 'Piece of Love Riddim' on November 06, 2020. The riddim features some of reggae music heavyweight such as " Cocoa Tea, Queen Omega, Buzzrock, Promise No Promises " and many more!

The Riddim is available for Purchase/Streaming kindly Click the link: https://smarturl.it/PieceOfLove

Walshy Fire is an international DJ/Producer/Performer, who, along with Diplo, and Ape Drums makes up the duo Major Lazer. Walshy is also a full fledged member of the world famous Reggae sound system Black Chiney. Walshy has been pushing Caribbean, Hip Hop, and Electronic music across the globe for over two decades.

The Expanders have come to be known for their vintage “rockers” style of reggae, played in the tradition of classic 1970s Jamaican groups like The Ethiopians, Culture, and The Mighty Diamonds. Their music emphasizes three-part vocal harmonies and strong songwriting. In addition to performing their own original material and rare Jamaican scorchers, since 2006 The Expanders have been the chosen backing band for legendary Jamaican singers when they come to California to perform. The group has backed classic artists Alton Ellis, The Maytones, The Ethiopians, The Wailing Souls, and many more. For two years in a row they were featured at the Sierra Nevada World Music Festival in Mendocino County where their performances were praised by The Beat magazine as having recreated “the old classic Kingston rocksteady sound to a T.” They have been frequent guests on SoCal radio shows such as Reggae Central with Chuck Foster (KPFK 90.7 fm) and The Reggae Show with Junor Francis (KXLU 88.9 fm).

Posted by Addiverbalist Kev at 20:31
Email ThisBlogThis!Share to TwitterShare to FacebookShare to Pinterest
Labels: Reggae Riddim