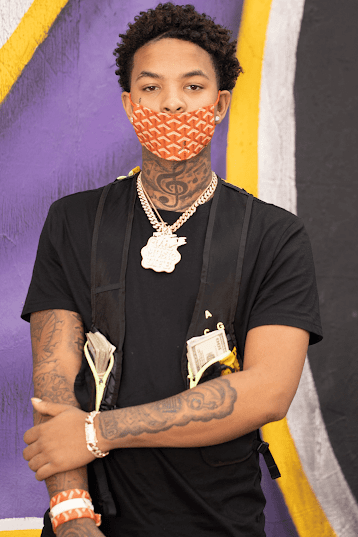 Originality outlasts eras. With a fresh flow, smooth style, and unbreakable spirit, Prince Taee presents an irresistible, inventive, and intoxicating strain of hip-hop all his own. He could walk off the set from a classic nineties video or turn up in your Instagram feed and exude the same timeless charisma. After generating millions of streams independently, gaining co-signs from Fabolous and Jazze Pha, and attracting looks from WorldStarHipHop and more, the Las Vegas-based rapper introduces a signature sound unlike anything else in the game on a series of singles for TML/ART@WAR/Atlantic Records and his forthcoming 2020 debut.

“You can still be yourself in this generation,” he exclaims. “You don’t have to follow anybody. You can make it by being original. I want to do something you haven’t heard before.”

His story would be equally original. Giving birth at the age of seventeen, mom sang and essentially passed the mic to her son. At three-years-old, he graced the stage for the first time, crashing his mother’s performance in front of a South Central crowd of 1,000-plus for a birthday party. Taee’s biological father left his life early on, but mom’s husband—“dad” and grandson of late soul legend Solomon Burke—also made music and fostered his interest.  Throughout elementary school, he played trumpet, saxophone, flute, and recorder.

The family eventually moved from Compton to Victorville. However, a series of hardships followed. Dad died in a tragic car accident. Only six months later, he lost his uncle to gun violence. Listening to the likes of Chris Brown, Michael Jackson, Lil Wayne, Emimen, and Speaker Knockerz [“Lonely” would be a favorite], he dove into music.

“I didn’t get really serious about it until my dad passed,” he admits. “He and my uncle inspired me, and I’d lost them six months apart. It gave me a reason. It pushed me. I knew I had to do something to take care of my family.”

Settling in Vegas during 2016, he instigated buzz with the 2018 single “Run It Up” [feat. JehKai], which gathered over 300K Soundcloud plays. Superstar Roddy Ricch even extended praise to the video in a Instagram post comment. It also marked a full circle moment. A few months after graduating, he returned to his high school for a performance in the gym, and it promptly turned into pandemonium.

“We threw five-hundred one-dollar bills in the air, and the crowd rushed the floor,” he smiles. “I barely graduated. My teachers told me I wouldn’t be able to rap for a living. They kicked us out that day,” he laughs.

Around the same time, he linked up with Brooke da Brand as management from TML (The Music Life). He found out TML’s CEO Danny Jones was related to his biological father—connecting them by blood.  The rapper saved enough money from working at McDonalds and performing at local shows to shoot the “Party” video in 2019. After its premiere on WorldStarHipHop, tragedy struck again.

“Me and my uncle were caught in the wrong place at the wrong time,” he recalls. “I got shot in the leg. He got shot five times. I was in the hospital for two weeks.”

However, he had an unexpected, though extremely welcome visitor. YBN Nahmir dropped by and showed support. Shortly after, Taee landed a deal with TML, ART@WAR and Atlantic Records. Now, he doles out his first banger of 2020 entitled “Free Crack” [feat. MyCrazyRo & YBN Almighty Jay]. Over the snap of 808s, he bodies the beat with a nimble flow and hard-hitting hook before engaging in a lyrical crossfire with MyCrazyRo and YBN Almighty Jay.

“I’m not even trying to be hardcore, but the title sells itself,” he says. “It’s a metaphor. I call it ‘Free Crack’, because the lyrics are so dope the song is like crack you don’t have to pay for.”

The next single “Just My Type” [feat. YK Osiris] (produced by Bradd Young and Vega Heartbreak) re-ups Tamia’s 1998 classic “So Into You” and extends a musical lineage also upheld in 2003 by Fabolous’s Billboard Hot 100 Top 5 smash “Into You”. With YK Osiris in tow, he cooks up a breezy jam tailormade for summer romance. Fabolous even cameoed in the South Central-shot video.

“It was just magic,” he elaborates. “You’re telling a girl how much you’re into her and how you’re even changing for her. It wasn’t about being vulgar. I got in a romantic vibe. I was born in 2000, but I get to keep that nineties love going for a new era.”

Meant for the streets, “Wraith Ryder” revs up with a hard-hitting hook “about me being a beast at carrying my city.” Claiming Las Vegas, he nods to Floyd Mayweather as one of his biggest inspirations. “Call me ‘Baby Floyd’,” he grins. “We have both moved to Vegas and put on for the city!”

In the end, Prince Taee shines the most by simply being himself.

“I want everybody to know you can come from a small city and make it out,” he leaves off. “I’ve seen people get killed, lost family, and worked two-to-three jobs while going to school at the same time. I saved those checks for the studio and bought my own cars. I’ve had a grind mentality. I’m proof—if you grind hard enough—you can go from McDonalds to Atlantic Records in a year. It’s about having that goal and making yourself actually do it. I speak for the streets. Anybody can make it. It’s possible.”

With a fresh flow, smooth style, and unbreakable spirit, Prince Taee presents an irresistible, inventive, and intoxicating strain of hip-hop all his own. He could walk off the set from a classic nineties video or turn up in your Instagram feed and exude the same timeless charisma. However, he went through it all on his journey, watching friends die, losing family members, and working two-to-three jobs while going to school in order to make it. After generating millions of streams independently, gaining co-signs from Fabolous and Jazze Pha, and attracting looks from WorldStarHipHop and more, the Las Vegas born  and  based rapper introduces a signature sound unlike anything else in the game on a series of singles for TML/ART@WAR/Atlantic Records and his forthcoming 2020 debut. He kicks off this barrage with “Free Crack” [feat. MyCrazyRo & YBN Almighty Jay], the follow-up “Just My Type” [feat. YK Osiris], and more to come.

Posted by Addiverbalist Kev at 13:41
Email ThisBlogThis!Share to TwitterShare to FacebookShare to Pinterest
Labels: Biography