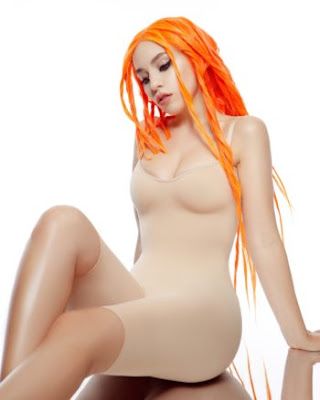 For dreams to manifest into reality, it requires more than a fairytale wish…

Truthfully, it takes hustle, heart, and a whole lot of attitude. For as much as Ava Max could always envision her dream, she actually went out and made it a reality on her own. Gathering billions of streams, multiplatinum plaques, award nominations, and acclaim from The New York Times, Rolling Stone, and many more, the international phenomenon projects an unbelievable personal journey into a poignant and punchy pop opus on her full-length debut album, Heaven & Hell [APG/Atlantic Records].

“Manifesting is really important to me,” she explains. “I put positive energy into my music. I know what I want to write, and there’s a story behind each song. It’s all about working hard and putting your heart and soul into it.”

She started doing so as a kid. Prior to her birth in Milwaukee, Wisconsin, Ava’s parents emigrated from Albania to the United States. Without speaking a word of English, mom and dad held down three jobs each. However, both parents retained a passion for music. Among her earliest memories, Ava recalls her mother—a classically trained vocalist—singing opera aloud. The family relocated to Virginia where they eventually settled in their first house. Along the way, Ava clung to music, listening to Whitney Houston, Mariah Carey, and Shania Twain, to name a few.

“At a very young age, I watched my parents really struggle in America,” she admits. “It was tough, and it impacted me in many ways. However, both of them always told me if they could make it here with no language and no money, then I could make it.”

While in Virginia, she dove headfirst into music with the family staunchly behind her. She participated in countless vocal competitions and auditions before moving to Los Angeles with her mother. After a year of pursuing potential producers and collaborators to no avail, they returned to the East Coast. “Nobody wanted to sign a 14-year-old girl they hadn’t heard of, but it didn’t matter to my mom and I,” she recalls. “We had to try.” A few “normal high school years” followed until she made another run at Los Angeles with her older brother three years later. Her mother and father arrived shortly after. By chance, she ended up at a birthday party for producer Cirkut. After hearing Ava sing “Happy Birthday,” he invited her to collaborate.

This collaboration yielded the 2018 triple-platinum smash “Sweet but Psycho.” Streamed over 2 billion times by 2020, it clinched a spot in the Top 10 of the Billboard Hot 100 for three weeks. As the tune took the world by storm, The New York Times named it among the “54 Best Songs of 2019,” and Rolling Stone christened her “An Artist You Need To Know.” Becoming inescapable, “Sweet but Psycho” received a nomination in the category of “Choice Pop Song” at the Teen Choice Awards as she took home “Best Push Artist” at the 2019 MTV Europe Music Awards. In addition to performing on The Late Late Show with James Corden, Jimmy KIMMEL LIVE!, and The TODAY Show, she appeared in features by Vanity Fair, Billboard, PAPER, FORBES, and more. She only accelerated this rapid rise to pop superstardom with the gold-selling “So Am I” [349 million Spotify streams], “Salt” [162 million Spotify streams], and “Kings & Queens” [159 million Spotify streams]. Right out of the gate, “Who’s Laughing Now” continued this hot streak, amassing over 13 million YouTube views and 1.6 million streams in less than a week.

In the middle of this whirlwind, she pieced together Heaven & Hell.

“Everything changed after I released ‘Sweet but Psycho’,” she observes. “I was an unknown artist for a while, and all of the work paid off. I had a bigger reach, so I felt like it was time to finally put out a body of work. Heaven & Hell represents light and dark, good and evil, and the devil and angel on your shoulder. I’m discussing the dualities of the challenges we face each day. Some songs have darkness; other songs are more positive. Heaven & Hell is the middle ground. It’s moody but it’s also positive.”

Among numerous highlights, the album single “Naked” evinces this duality. Neon synths glow in between a glossy beat as a confessional chorus echoes, “You can take off all my clothes and never see me naked.”

“It’s about the real emotions we go through,” she says. “If you don’t know my mind, soul, and heart, you’ll never know me by seeing me naked. We are more than our physical bodies. That’s what I wanted to show.”

On “OMG What’s Happening,” a skittering guitar riff brushes up against another hypnotic high register harmony right before the hard-hitting hook where she urges, “Look what you’ve done to me.”

“We all go through moments of loving and hating the person we’re with,” she goes on. “I feel like every single relationship is like that. I’m basically torn all of the time.”

At the same time, she empowers throughout the project, carrying each track with confidence earned from this journey.

“My sound is loud, brave, and very unapologetically pop,” she exclaims. “It’s also vulnerable. These are anthems for queens, and I believe anyone can be a queen. You just have to be authentic to yourself.”

That’s exactly what Ava Max does.

“When you listen to Heaven & Hell, I want you to feel empowered, strong, and like nothing can stop you,” she leaves off. “I try to support and inspire. All of my songs reflect togetherness and love. If my story can help one person, it’s all I could ask for.”

Posted by Addiverbalist Kev at 13:41
Email ThisBlogThis!Share to TwitterShare to FacebookShare to Pinterest
Labels: Biography