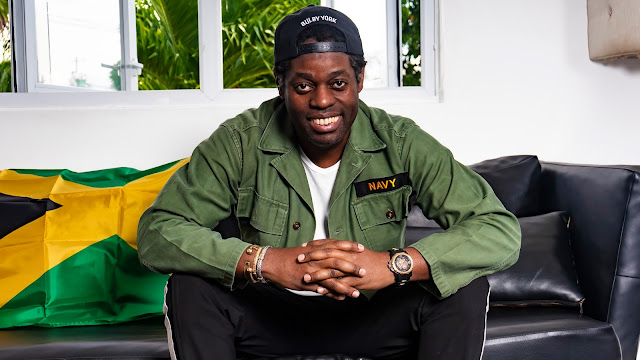 His list of credits reads like a who’s who of pop music: No Doubt, Rihanna, Britney Spears,

Madonna. It’s reggae and dancehall that the Kingston, Jamaica native is best known for, though.

As one of Jamaica’s most in-demand studio men, he has put his touch on signature records by

behind the scenes, Bulby stepped out with his debut project, Epic & Ting. Released

on Greensleeves Records April 22, 2016, the album combines his skills as a sonic architect par

excellence with his ear for talent, resulting in an LP of truly epic proportions.

Bulby got his introduction to music making as a youth, when he started following his uncle,

dubmaster King Tubby. Young Bulby was soon learning the ropes of recording from the Godfather

of dub music, and one of the most influential audio engineers of all-time. “I didn't realize he was

such a legend, I just knew he was way ahead of his time,” Bulby says of Tubby. “He was building

After graduating from Kingston’s Dunoon Technical High, he got a summer job at Jamaica’s then

brand-new Mixing Lab Studio. His first session was with Junior Reid, the legendary singer of Black

Uhuru and “One Blood” fame. “He was producing a rapper from London who was on the label he

was signed to,” Bulby recalls of Reid. “We recorded a whole album and, from that session, my

In 1992, he began producing his own records when his uncle Dusty formed C&G Music, working

with dancehall artists like Daddy Screw. In 1993, Bulby launched his own label, Fat Eyes, with

"Memories.” Its influence can still be felt, as “Memories” was recently sampled by Kanye West

for “I’m In It,” a standout track from 2013’s critically-acclaimed Yeezus album. Other key Fat Eyes

releases produced by Bulby include “Want You Back” by Singing Melody, and Capleton’s “Pure

and Steely and Clevie, as well as Sly and Robbie, who tapped him to engineer their original reggae

productions as well as remixes for international artists like Chaka Khan, Cyndi Lauper and Sinead

O’Connor. As dancehall sounds went mainstream in the early 2000s, Bulby was right in the mix,

dancehall classic, Dutty Rock. As his reputation grew internationally, he also began to

travel as a live engineer, which he continues to do to this day with the likes of Michael Franti and

After years of bringing other people’s projects to life, Bulby now has a masterpiece he can call his

own in Epic & Ting. The album features a mixture of reggae staples (Sizzla, Maxi Priest) and upand-

coming talents (Lennox, Ch’an) from across the Caribbean. "The concept is me being the

Caribbean,” he told the Jamaica Observer. “It is similar to a David Guetta or a Calvin Harris

Fans of reggae music will be treated to some truly epic collaborations. “Anything Goes” teams

“Whom Shall I Fear,” he pairs dancehall boss (and Kanye and Kendrick collaborator) Assassin with

some lost vocals from Tenor Saw, the late icon known for “Ring the Alarm.” And “Soul Almighty”

“This album has a lot of different vibes on it,” Bulby explains. “I want people to put this album on

and get the urge to go to work or school with a positive attitude. It can be played while you're

working out in the gym, or just driving to the grocery store. I think it’s the perfect vibes builder.”

Master Blaster, the follow-up album to Bulby's 2016 Epic & Ting, leads off with the album's first

Martin and Beenie Man, as well as a signature Fuzzy Jones sample. "Dance With Me" delves into

Boog, and the ever-formidable Lutan Fyah. "Hands Up!" is a militaristic hip hop-flavored account

of the war in the streets between police and the people, as told by hip hop/reggae/soul fusion

and dicing the riddim with his trademark lyrical daggers, while D.C-based Ethiopian rapper LoLa

Monroe serves up some heat of her own. Rounding out the song is singer-songwriter Candy

Gloster, who lends her vocals for the catchy chorus. The album's only previously released

UB40. Bulby recruited Chevaughn to voice "Music and Weed," an addictive sing-along that the

producer picked up from the C2W (Caribbean 2 World) songwriting camp in Jamaica. "Never

Leego backed by Grammy-nominated band Raging Fyah to add some musical texture. Next up is

"Shoot the Moon," another dancehall track that features the girl x boy combo of Bajan singer

Ch'an and dancehall stalwart Mad Cobra. Closing out the album is the unexpected "Kundalini"

"With this album, we are selling vibe, not just music," explains Bulby. "I wanted something

spiritual to highlight the album, so I linked Danielle for a poem. She is my friend and also one of

the world together with a spiritual energy that matters."

The prolific engineer and producer, who is best known for producing pillars of reggae music like

Beenie Man's "Stop Live in a de Pass" and Yami Bolo's "Weapon of Destruction," is currently

manning the FOH boards on tour with Michael Franti & Spearhead.

Posted by Addiverbalist Kev at 09:45
Email ThisBlogThis!Share to TwitterShare to FacebookShare to Pinterest
Labels: Biography