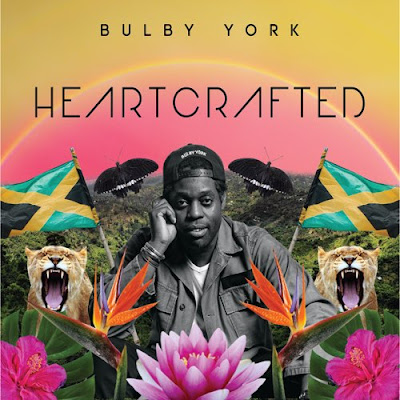 As reggae-dancehall music continues to evolve and influence other genres, cultures, movements, and people across the world, to date, it stands unparalleled to any other worldwide. The treasured genre which spans several decades, not just chronicles an islands evolution and its influence globally but promotes the tenants of Rastafarianism whilst strengthening the voice of the oppressed.

The album ‘Heartcrafted’ which can be described as a time capsule for future generations, captures not just the traditional sounds of reggae and dancehall but also gives its audience previously released materials with some of the industry’s most prolific, and successful artiste to date, bridging old school voices with a few from the freshman class.

The 17-track compilation which takes you on a musical journey across the breadth and depth of the islands luscious landscape, captures the sounds and melodies that echoes through the mountains and valleys chanted by its people, the pulse of a nation.

Bulby York who is a renowned musical architect as the genre went mainstream in the early 2000s, worked with some of the industry’s rising stars which positioned him to engineering tracks for No Doubt’s double-platinum Rocksteady album, as well as Sean Paul’s era-defining dancehall classic, Dutty Rock.

As time progressed, Bulby’s talent was revered by many, as his talent was noticed which led to other top Jamaican producers like Winston Riley, Steely and Clevie, as well as Sly and Robbie, enlisting him to engineer other productions. This led to him working with/for international artiste like Chaka Khan, Cyndi Lauper and Sinead O’Connor and is credited to several other noteworthy projects such as Bounty Killer’s “Suspense" and Beenie Man’s "Memories” which influenced Grammy-award winning rapper/producer Kanye West single “I’m In It,” from his 2013’s critically-acclaimed Yeezus album.

York who in 2016 released his debut project titled ‘Epic & Ting' on Greensleeves Record also followed up with ‘Master Blaster’ in 2018 to rave reviews on his own label Bulby York Music.

‘Heartcrafted’ is distributed by VPAL music, a subsidiary of VP Records and can be considered as a testament to the legacy of the late reggae icon ‘Toots’ Hibbert plus other reggae-dancehall industry icons.

“I have poured my heart and soul into this project and now it’s here for the world to hear, see and enjoy. Each track has its own meaning and history, just as how each parish in Jamaica captures a piece of what Jamaica represents. I have worked with some of our nation’s best, national treasures and this project captures not just our musical history but who we are” states Bulby York.

“Heartcrafted” is available on all musical platforms globally.

PLEASE SUPPORT THE ARTISTE & PURCHASE BELOW

Posted by Addiverbalist Kev at 08:54
Email ThisBlogThis!Share to TwitterShare to FacebookShare to Pinterest
Labels: Album