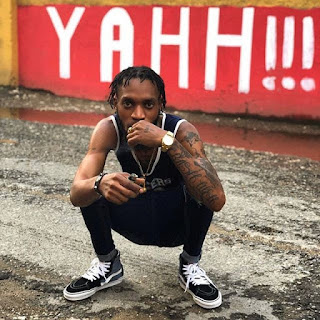 IWaata
If you are a male with a nickname like
IWaata, chances are that you will be centre of jokes and good natured teasing in your community. However, it takes a lot of inner strength to take a name like I Waata and transform it into a message of hope, dignity and perseverance, but that is exactly what ultra talented dancehall artiste Jason 'I Waata' Bailey did.

He has been blowing up FM radio with his latest single, 'Pat A Shake' and his high-energy performances at community events and school fetes have gained him a legion of young loyal fans.

This youngblood grew up in the Kintyre community and attended Mona Primary and then Papine High school, falling in love with music at an early age.

"i used to go Mona Primary where i used to beat congo drum and when i went to Papine high, i used to build lyrics in first form. I used to watch my bredrin father, Kootan, from my community deejay, and then I build my first song, 'I o'clock'," I Waata said.

He explained that he got the name, IWaata from his grandfather.

"I got the name I Waata from my grandfather because I was allergic to a plant in my yard and when I looked at it, it always used to make my eyes run water, so him say 'eye water yu fi name' so when mi start to do music in second form, mi decide to use the name my grandfather give me, 'eye waata' and change the meaning because mi come from the inner city, and I Waata is the signature of the poor," he said.

In 2008, he recorded his first official song at a studio in Mona for a producer called Sherkhan. However, the song wasn't properly promoted. Unfazed, he continued to work on his craft. He got a big break when he was selected to be an opening at Sting 2014 in Portmore. He also performed at shows such as Ghetto Splash in 2013 and 2014.

He said that his music is heavily influenced by a number of artistes, but principally dancehall superstar Vybz Kartel.

"I am influenced by Vybz Kartel, but mi pick a page out of every artiste book, and put them in my catalogue and stir dem and a murda," he said.

In recent months, I Waata has released songs such as 'Launch an Attack for Boyzie Records and 'Wanna Be Gyalis' and he has seen his stocks rise after he inked an official recording and booking deal with Papine-based Boyzie Records. The young deejay's first jumped into the spotlight He with his song, Swinging Bridge' and he has grown from strength to strength.

"The 'Swinging Bridge' opened the gateway, I was on the sideline and did a warm up but my next song, 'Pat a Shake' put me on in the match, and put mi up to the midfield, so the next move ah forward line mi reach, so right now, Pata Shake a give me most feedback, worldwide, social media wise, radio wise and in the street wise, yea, Pat a Shake, Pat a Shake, a murda," he said.

There are plans to shoot videos for 'Launch An Attack', 'Pat a Shake' and 'Talker' in the near future.


New track releases from the fast rising dancehall star include; Bare face gyal on the Power House Riddim, Vexx on the Aircraft Riddim, Blah Blah on the Banga Money Riddim, and Loud on the Fat Shot Riddim...check out the video below.