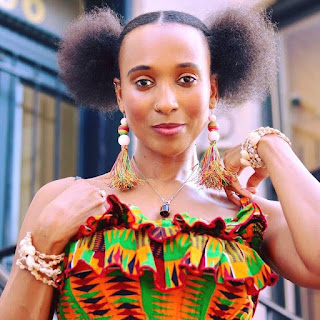 Multi-talented artist Miriam Chemmoss hails from East-Africa. She spent her formative years between Tanzania and Kenya where she was steeped in a potent brew of her family’s diverse African, European and Middle-Eastern cultural heritage.

As a teen, Miriam was involved in theater and music programs in every school she attended - close to 10 schools - as a result of frequent relocation due to her father’s military career. It is this unusual background and diversity that would give Miriam the discipline and confidence to enter both solo and choral competitions during national drama and music festivals in Kenya.

In 1998 Miriam was awarded a full scholarship by Waldorf College, a liberal arts school in Forest City, Iowa. She studied Theater/Music and Media Studies (Print, Electronic and Digital), which prepared her well for the performance arts scene in Washington, DC, where she would later move to, in 2001 upon graduation.

By late 2002 Miriam had taken part in several regional theatrical shows in Washington, DC, hosted her own radio show - “Retrospect” at Voice of America Broadcasting Services - and would later be featured in the CBS hit Television series “The District" in 2003. Miriam was also featured in several independent films such as “Refuge”, “Mirrors” ,“To Sleep With Anger”, amongst many others.

While in New York City in 2004, Miriam was also lucky to land many print and television modeling jobs while also honing her music performance skills as a member of “The Marvalletes Revue”, a revival of the Motown girl group under the direction of original Marvallete Pam Darden.

Miriam toured with the "Marvalletes Revue" and shared stages with legendary groups such as "The Escorts", "Kool & The Gang", "Soul Generations", "Prime", and "Blue Magic" among others. In 2005 she joined the legendary “Soukous Stars” band, experts at Congolese Rumba and winners of the 2004 International Reggae and World Music Awards. Here, she carved out a role among the male veterans as the sole female voice on both harmony and lead vocals.

In late 2005 Miriam recorded "LOVE IN REVERSE", followed by the release of her commercial single “RUDI” in early 2007. A Swahili love anthem which literally means “come back”, “RUDI” is an enchanting classic that topped the charts and countdowns of several radio stations in urban markets all over the world: BBC Radio (UK), SARFM (New York), VOICE OF AMERICA (Washington, DC), Hot 96 FM, KISS FM, CAPITAL FM (Kenya), SANYU FM (Uganda), GHANA CHOICE FM, and others. "RUDI" earned Miriam much credit as a songwriter and performer.

As a performer, Miriam depicts an eccentric and sultry stage presence. Her vibrancy is evident on the “RUDI” video, which was in rotation on MTV Base, Africa, EATV as well as many local and international TV stations from early 2007 to mid-2008. As a result of the buzz from "RUDI", Miriam has been featured in several publications in the US and overseas. Vibe Magazine featured her in the Sept 2007 issue, calling her “The Queen of African Urban Music” and other publications have given her work great reviews.

When asked where she gets her inspiration, Miriam cites her own life experiences, regional and global issues, as well as African singers such as her namesake Miriam Makeba, Sade, Tshala Mwana, Angelique Kidjo and Brenda Fassie, among others.

Over the last years, Miriam has recorded a new album "Lovebird" and is currently planning her second, highly-anticipated release. Her music, much like her cultural heritage is a fusion of many sounds; it beautifully blends Afro-pop, Reggae, R&B, Hip-Hop, Soul, Rumba and Zouk, giving her a wide musical audience.

When she is not performing on stage, in films or recording music, she's writing a motivational book series and advocating HOLISTIC WELLNESS, ENVIRONMENTAL RESPONSIBILITY and PEACEFUL CO-EXISTENCE via her websites, videos and blogs.

In 2010, Miriam stared in a riveting role as "Waridi" in the post violence drama, "Suspence" (Taharuki) which made rounds in all major film festivals, including New York African Film Festival, Durban Film Festival and others. In early 2012, Miriam was picked to star as a lead in the independent film "Amnesty" which was released late summer of 2012.

Miriam Chemmoss’s unique self-expression, multiple talents, as well as her rich cultural background are a much needed breath of fresh air in the evolving African/Diaspora film and music industry.

Reach out to Miriam Chemmoss at the links below:

Posted by Addiverbalist Kev at 16:26
Email ThisBlogThis!Share to TwitterShare to FacebookShare to Pinterest
Labels: Biography