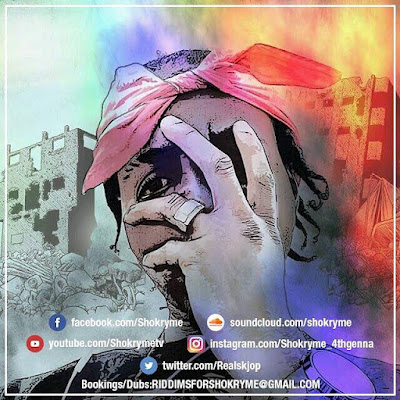 Jamaican Dancehall artiste Jason Pinnock aka Shokryme was born on July 29, and grew up in the inner cities of Kidd Lane, Kingston 13 Jamaica. Shokryme a past student of the prominent High School St. George’s College was not always sure of his career path; some would even argue that the “career” chose him. His love of music blossomed in the 8th Grade, where he found himself on numerous occasions deejaying lyrics.

It was from infamous school clashes that further built his confidence and further fueled his drive to become an artiste. The nickname “Showtime” was also bestowed upon him because of the popular Riddim of the time & his uncanny ability of exciting immense reactions from his fellow schoolmates . It was as a result of this that “Shokryme” continued to light the fire under his new found passion and started to compose his own songs while transitioning into 3rd form.

In 2003, Shokryme established a relationship with Kidd Lane area Sound “World Rock” where he recorded his first dub for Bazzle Kat . This opportunity concretized even further his dive into the music world and now further increased his popularity beyond school grounds and into his childhood community.

Shokryme drew on influences from the likes of Artistes such as Aidonia, Capleton ,Cobra, Bounty Killer and Shaggy while composing his lyrics. It was these influences that helped to shape and create his eclectic hardcore sound. It was in 2007 that Shokryme’s fate as an artiste was sealed, when two of his schoolmates known as “Kemar Tull Malcolm ” and “Govana” formerly known as “Deablo” also a J.O.P artiste, made the introduction of the young Shokryme to one of his musical mentors and dancehall hit maker Aidonia. It was here that a musical allegiance was formed and where the teenager’s name was changed from “Showtime” to “Shokryme” by J.O.P member “Size 10”.

Shokrymes first real test of lyrical potency under the J.O.P movement was displayed in 2011 on the “Our World” Riddim produced by “Gerry Digital” of Gerusalem Music entitled “War Start”.

It was amongst this musical family of young aspiring artistes and under the patronage of Aidonia that he developed and honed his skills as an artiste. He along with other J.O.P. members travelled with Aidonia and performed as opening acts at numerous local events. In 2012 he did his first collaboration with Aidonia and the rest of the J.O.P. family called “All 14”, it was then followed up by single "Life Affi Betta" produced by “Ancient Records” on the “Pure Wata" Riddim. He then released another single in quick succession entitled “Dead Bad” on the “Hot Yeer" Riddim.
Shokyrme continued to build his musical repertoire by releasing his 2014 debut mixtape “Ghetto Voice” produced by “Gerry Digital” of Gerusalem Music. This mixtape boasts a total of 16 Tracks and showcases the full length and breath of his musical stylings. He fires lyrical shots about the complexities and struggles of ghetto life and makes himself the platform from which the people’s cry is heard.

The 2015 release of Shokryme's follow up mixtape entitled "Young Rula" features songs that have been produced by various members of the music fraternity. These include, "Darshan Records" with a song entitled "Run Go", "Zackariyah Records' single "Owna Gun" and "Kullijhan Records" "Question". This 22 track mixtape also features "Hell Yuh Guh"' which has been causing quite a stir in the streets.
Shokryme has since been featured on Toddla T's BBC 1 Extra Freshman Freestyle which has given him exposure to different audiences worldwide. He has been featured on "The Champ" Riddim produced by the prominent ZJ Chrome.

April 2017, Shokryme made his debut on the Equiknoxx imprint. After recording several songs, the group has narrowed down the set to the three (3) tracks that work best together.
Bandana is a combination of old friends and new beginnings. Produced by Gavsborg ; Bandana was compiled with long -time friend and manager of Shokryme, Gerry Digital.

The lead single “BBS” is a collaboration with Birmingham MC, Rtkal. The project also features Frisco of the London based label/collective Boy Better Know Gavsborg describes Shokryme as very individualistic and he is always amazed at how Shokryme narrates happenings of the nether regions of Kingston, Jamaica.

Posted by Addiverbalist Kev at 12:52
Email ThisBlogThis!Share to TwitterShare to FacebookShare to Pinterest
Labels: Biography