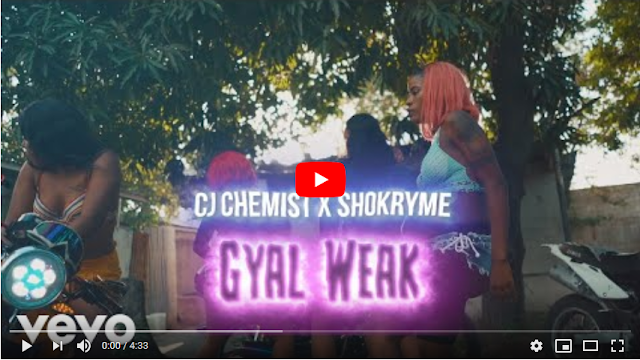 4th genna recording artist Shokryme and Record producer CJ The Chemist have finally released visuals for the Hit Song titled “Gyal Weak” on the Stress Relief Riddim. They teamed up in 2017 on the  Bacardi/Major Lazer Music Liberates Music campaign which saw Shokryme’s song “Gold” being featured in the campaign.

Shokryme, whose given name is Jason Pinnock, is from Kidd Lane in Kingston 13. The former St George's College student said his love for music developed while in eighth grade. He is well know for his fusion of dancehall and grime music considered as dancehall-grime thus separating himself from the glut of dancehall artistes on the scene.

Shokryme has recently worked with Equiknoxx Music for a three-song EP titled Bandana. One of the tracks from the EP, “B.B.S.” was featured on rapper Drake's OVO Sound Radio Episode 43. The track also made its debut on BBC 1Xtra.

CJ The chemist has also been making steady progress through his own record label, Chemist Records, which saw him record his first Aidonia single titled “U Alone”. The song was featured on Aidonia's EP Project Sweat, which received an honorable mention from Billboard magazine.

He continues to enjoy good fortunes as one of his singles, ‘Robot Wine’ performed by Dancehall artiste Spice got featured in the American television series ‘Love and Hip Hop Atlanta’. CJ has worked with a number of top-tier dancehall acts including Da'Ville, Aidonia, Spice, Kranium, Kappa, Noah Powa, ZJ Liquid among others.

Here are the visuals for the Music Video:Shot & Edited by ShortFilmzJA Produced By: CJ The Chemist.

Posted by Addiverbalist Kev at 12:53
Email ThisBlogThis!Share to TwitterShare to FacebookShare to Pinterest
Labels: Video