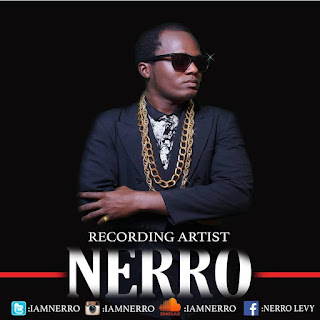 IAMNERRO
LEON LEVY now well Known as NERRO is a Jamaican born artist. Raised in the community of Waterford, Portmore , born December 6, 1987. NERRO has been into music from just a tender age. Nerro was shy at first, but that has grown out due to him getting more affiliated with music and performing live. Most of Nerro's inspiration comes from his father Barington Levy. In our present time, many artists undergo struggles trying to establish their musical identity. As for the recording artiste "NERRO" it comes naturally.

With one of his latest hit song entitled "Draw Me Out" it has been moving and captivating. The feedback shows how much it has done for justice in the dancehall industry. And having a great impact on the airwaves. Nerro's music can be described in various ways, A hardcore style that gives you something to dance and move to and also a soft side that gives listeners music to touch their souls and captivates them.

NERRO explains "After singing and dejaying so many songs and showing my different sides of versatilities and getting numerous amount of amazing feedback, I decided to give it a try and record my first song professionally. Which is entitled "Clean Heart" and the love I got for the song motivated me to really go full hundred as a recording artiste." NERRO can be described as being Fun, determined, motivating, positive and goal oriented. Nerro's goal to pursue within his musical career is "to get a grammy award" which by hard work and the will of god will be a reality. He has his mind set on performing with great acts like Barington Levy, Beres Hamond, Sizzla Kalonji and Vybz Kartel, where he can truly showcase his talent.

NERRO is currently working hard and writing good music, so he can keep his fans entertained. Through his hard work and dedication in doing music, expect endless amount of NERRO music for the soul. NERRO quotes "My music will have a great impact on all listeners, on the fact that I do songs based on reality or simply, songs from the mood am in, describing real events." When NERRO is to perform at any live event, every individual and all fans, can lookout for a performance compact with great delivery and excitement. And come with a open mind because NERRO is all about pleasing his fans. NERRO'S music isn't based on one specific image. The mere fact that he writes about his mood and what he sees in his daily life, he does music rated G, PG and also R.

Currently NERRO is working on putting out some new singles, so his fans can look out for that. Before the making of his album, he first wants to market himself in a way that he can be known globally and his music will be highly recognized, then albums will be constantly releasing. NERRO states that "I want a widespread fan base globally! But my aim is to get the Caribbean to gravitate to my music first, and then aim for the United States and then Europe." NERRO is currently managed by the record label entitled, TCH Records.

The advice that NERRO has to give to all upcoming artist is that, "They all should do good music that can be felt by others. Always keep there heads on their bodies and remain fully focused. Use all struggles as motivations". NERRO along with his musical talents also plays the piano and the drumset. NERRO is currently doing numerous amount of projects, and all fans and future fans should keep their ears and eyes opened as the name "NERRO" will be getting familar due to his hard work, will to strive and also by the powers of the most high.