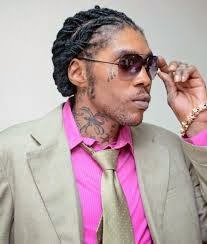 From you know the man Adidja Azim Palmer born 7 January 1976 better known as Vybz Kartel aka Addi Innocent the "Teacher" is a reknown dancehall Artist/Icon hailing from the Waterford district in the community of Portmore Jamaica.Vybz Kartel hits pon the playlist include; Romping shop, Summer Time, Poor People Land, Weed Smokers, Clarks, Street Vybz Girl, Don't Run...just to name a few.
Though starting his career at a tender age,Vybz Kartel has had the best of his career. Being a member of the Alliance Squard Kartel later left and formed his own label Portmore Empire giving rise to the establishment of the "Gaza Empire" and a new breed of dancehall lovers worldwide to the African continent call it the "Gaza Badbreed" the dancehall Alcoholics or the "Gaza Chronixx."
From you say Vybz Kartel every youngling, yute, dancehall lover, gallis, bredda, rass, mother, father can relate to his songs, could be his roots to the African culture even the deejays dem know seh can connect.The African Continent can't surely Sleep and see the Dancehall Star serve Jail time while nuff sound a play. call it the "Dancehall Starvation" "Dancehall Incarceration" every man wah see the Star Free!! Thus The Tribute to Vybz Kartel! Haffi Free like the birds dem innah the Air!!.To spoil the broth the court case sentence the man for "Murder" while all we know Vybz Kartel only "Murder" sound bwoy! What could be the cause? What could be the case? Justice? Justice it "MUST" prevail.
Get a good read of His Book:Voice of the Jamaican Ghetto
Known for his controversial songs Vybz Kartel has really outdone himself in the dancehall scene could it be his tough stun on dancehall music,call it the music stan or pun Vybz Kartel surely is a force to reckon with, higher than the highest grade.
Africa feel it Loud and Clear!! From Weh you deh Kenya, Uganda, Tanzania, Burundi, Zimbabwe, Central Republic, Ghana, Gambia, Nigeria, Niger, Senegal, South Africa, Namibia, Jamaica, Europe, USA, China, Middle East
"MEK YUH VOICE HEARD"
#FREEWORLBOSS