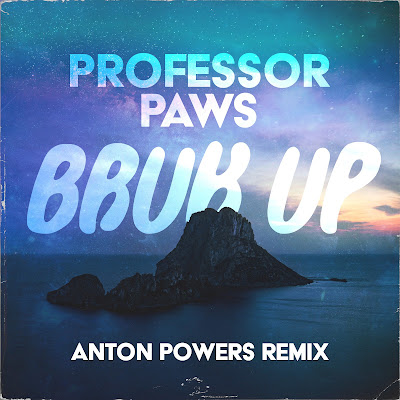 Bridging the gap between the UK and Ghana — Professor Paws walks a balance beam that sees him equalise his African and European lineage and frame it in music form. Drawing power from his cultural dyad, Professor Paws’ music resides somewhere between melody-driven R&B sound pools, sharp and crunchy electro-rap beats and ice cold Afrobeat cues. After captivating the masses with his 2021 EP ‘To The Bag’, the London-based artist and producer is back with his latest single ‘Bruk Up’.

They say all good things come in threes, and that’s exactly what we get with the ‘Bruk Up’ trilogy. The original ‘Bruk Up’ is kitted out with shimmering guitar licks, a head-nod-inducing riddims and a humid Afropop template. Things are amped up to 11 with the Amapiano remix of ‘Bruk Up’, which sees the track lean into rich West African production tropes with its mystical saxophone and horn elements.

The track title references Paws’ cultural crossroads: with the song title “bruk up” — a Jamaican patois term for ‘broken’ - filtering into his vocabulary from the close connections to the culture that he’s nurtured from his upbringing in London. Sitting perfectly alongside both his British and African influences, sounds and styles, Paws’ melting pot of travelled locales has created a summer anthem like no other.

We saved the best till last, though. The third and final mix of ‘Bruk Up’ sees the London-based artist tap Liverpudlian hitmaker and DJ Anton Powers for the extended remix. The jumbo-sized remix sees Powers reimagine the original tune, engineering the cut to feature all of his signature production quirks. With glistening synths, glossy vocal production and a killer drop, the remix fuses the worlds of house music and Afrobeat effortlessly. What a banger.

Speaking on the track Paws said: “This is about a true and mature heartbreak, I’m sure most can relate because it’s the most honest song I’ve written to date.”

Professor Paws hit the scene with his 2019 GRM Daily-housed collabo with Big Chess entitled 'Ride or Die'. Striking while the iron is hot, Paws' follow-up 2020 release, 'Rum Pa Pa Pum', climbed to almost half a million views on YouTube in a matter of months — no easy feat.

Outside of his catalogue, Paws is an acclimated producer and songwriter in his own right. As a beatmaker, Paws has worked with UK rap titans Giggs, Fekky, Cash, Joe Grind, and many more. As an instrumental scholar, Paws takes pride in his catalogue: rarely co-producing with others, crafting demo mixes and engineering tunes on the fly — truly living up to his professor mantle.

Last year, the musician blessed us with his EP ‘To The Bag’. For that project, one of the many standouts was Paws’ Notion co-signed single ‘Southside Girl’, currently sitting at almost 100k streams on Spotify alone.

Since 2021, Paws has undergone an artistic evolution and is currently piecing together his next masterpiece one track at a time. With three versions of ‘Bruk Up’ to choose from, the hardest choice you’ll have is deciding which version of the song you love more…

Stay up to date with PROFESSOR PAWS by following his socials for news about upcoming releases & more: