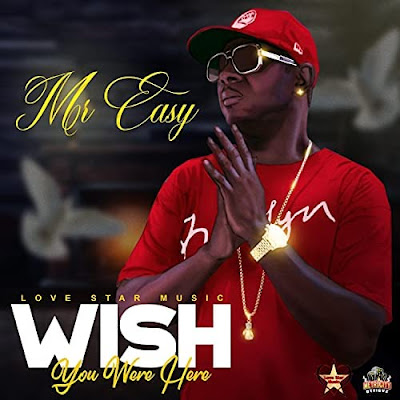 NEW YORK, New York -- January 2022 (Acclaim PR) -- Reggae and Dancehall legend Mr. Easy, aka Ian Dyer, proves timeless appeal on his latest release "Wish You Were Here." The impactful song, a melodic salute to fallen loved ones that has been buzzin' across music spaces, went viral following its use in a highly visible, public funeral in Jamaica recently.

Notably, international audiences have connected with "Wish You Were Here," using it to memorialize their loved ones on social media. In times of such profound loss, the song resonates with scores of grieving people."I co-wrote 'Wish You Were Here' with my birthplace of Jamaica in mind, as the country has been gravely impacted by twin pandemics of Covid-19 and killings," says Mr. Easy."However, I began to realize that with the worldwide impact of Covid-19, daunting experiences of loss, 'Wish You Were Here" burgeoned into a increasingly relatable song."Wish You Were Here" is not just a favorite among music fans, as selectors and sound systems also have an affinity for the song, playing an instrumental role in bolstering its impact. Whereas, national and international DJs and on-air personalities have played "Wish You Were Here" on core and mainstream radio stations, further expanding the record's reach.The companion "Wish You Were Here" music video sees Mr. Easy remembering a late friend and carrying out his promise to be there for his children. With Jamaica as the backdrop, the video includes scenes from across St. Catherine, including Flat Bridge, Dovecot Memorial Park and numerous Portmore locations. A theme of tranquility permeates the visual, which was directed by Tinman of Swag TV Filmz. Both the video and song are placing on a variety of respected music charts and countdowns.Produced by Love Star Music on the Changez riddim, the R&B-flavored Reggae track "Wish You Were Here," features the legendary Mr. Easy at his vocal best. Other acts on the riddim include Tishawna, Webstah and Sunshine Velvet. Notably, Mr. Easy is also enjoying the success of his upeat song "Friends Fi Life" with De Alpha, produced by DJ Jason for Romie Fame Records.Much to his credit, Mr. Easy is one of Reggae and Dancehall's defining voices. His long list of hits include 90's and 00's anthems such as "Funny Man" (Joyride riddim), "Man Ah Say a Who"( Rae Rae riddim), "Haters and Fools" (Bug riddim), and the massive "Drive Me Crazy" (Buy Out rhythm). The commercial success of “Drive Me Crazy” helped catapult Mr. Easy into the mainstream, appearing on the soundtrack for the movie "After the Sunset" starring Pierce Brosnan. Meanwhile, "Bashment Girl" with Frisco Kid, appeared on the cult classic "Belly" soundtrack.Wish You Were Here - Digital Link:https://songwhip.com/mreasy/wish-you-were-hereWish You Were Here - Music Video:https://youtu.be/uV6062cmn24
Posted by Addiverbalist Kev at 09:34
Email ThisBlogThis!Share to TwitterShare to FacebookShare to Pinterest
Labels: Music, New Release, News, Video