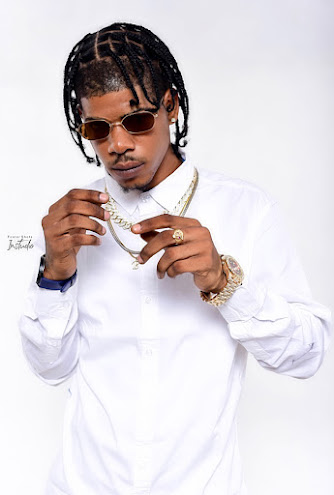 Dancehall Artiste  Fully Bad, has built his career to the point where he doesn’t see competition, and he is more than a star. For his upcoming sophomore album, Fully Bad calls himself, “Gad A Earth”.

Recently announced, Fully Bad looks to take his career to supreme levels with “Gad A Earth”. Having enjoyed some success from his debut album, “Born Fi Dweet”, Fully Bad has 20 tracks ready to show you why he’s worthy of the title. The Cassava Piece resident doesn’t see himself as being blasphemous with his title, and explains how it came about. “Inna mi community, Cassava Piece, you have the elders, the younger youths a come up, and everybody a look up to me as the young youth weh out deh a do it for the community so everybody call me 'Gad A Earth' or 'Bad Gad' which is how mi come up with the name for this album.”

The 20 track “Gad A Earth” is composed

of Fully Bad’s signature gangster music, but he expands his versatility by adding party songs, and songs for the ladies to the project. Producers featured on the album include Prince Villa Records, Moshouse Records, Tru Productions, BritishLinkz, Motion Vybz Sound, Full Charge Records and Sartout Records. Fully Bad is also gearing up to release the first single, the Sartout Records produced “Composure” on December 10. “My debut project showed that I was more than gangster music, and I will do it again with this album,” he shares. “The numbers a go up now as the fan base increases because we go out inna the streets and tek the music to the people. We're getting more love now, and all that helped to bring inspiration for “Gad A Earth”.

Fans of Fully Bad can look forward to the release of “Gad A Earth” in 2022. “Composure”, the lead single off the upcoming album, will premiere on December 10 on all digital music streaming platforms. Accompanying the single is a music video that will premiere on Fully Bad’s official Youtube channel. To stay up to date with Fully Bad, follow him on Instagram at @FullyBadMusic.