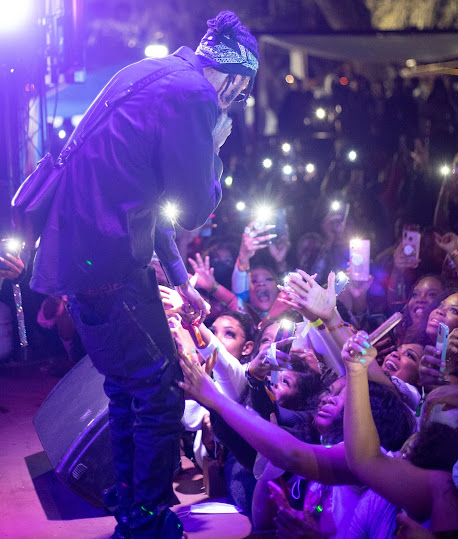 Kingston, Jamaica: Dancehall’s “Champion Boy” Alkaline delivered a stellar performance at the SD Lawn, Falkenburg Road, in Tampa Florida on the weekend, a little over a week after dropping his latest single “Top Prize”.

The highly anticipated performance, his first in 15 months, was met with rapturous applause from eager fans who drank from his musical fountain, singing hit after hit for close to an hour. Phones capturing the magical moments on stage, fans swayed to the beat of the manhimselff.

Screams, hollers and salutes from the mostly female audience permeated the air in his first track the 2016 hit, “Champion Boy”, with the artiste reaching into the crowd, an almost overzealous set of fans daring to pull him closer to cure their thirst for the 27-year-old artiste.

In his second track “ATM (All About the Money)”, fans frenzied into a fever pitch, first as background vocalists then as lead singers for the performance leaving the artist free to enjoy the stage as they sang with earnestness. At one point, he stood frozen as fans passionately held his feet, urging security to step in; Alkaline went along, in place, deejaying like the pro he is.

Other hits delivered for the night included “City”, “Formula”, “Move Mountain”, “Block & Delete” and “One More Time” as the over 1000 in attendance were treated to constant replays of their favourite songs.

As proven by the performance of his latest track “Top Prize”, his new music is imprinted on the hearts of his fans in anticipation for his upcoming 14-track album release.

Since its release on February 12, streaming numbers for the single have reached close to 900,000 with nearly 1 million views on his YouTube Channel, Alkaline Musiq. The track has landed on several “ones to watch” lists including Pandora, Spotify and Apple Music to name a few.

Social media, most notably Twitter, went into a tailspin upon learning of the track’s release with the hashtag #TopPrize and #TopPrizeAlbum trending online for several hours once dropped. Alkaline, as expected, continues to reign with millions of streams and music sales.

As his albums nears completion, the artiste will remain silent with his focus being about the music. In the meantime, fans can visit his store to purchase official Alkaline merch in anticipation of the imminent masterpiece.

Posted by Addiverbalist Kev at 07:46
Email ThisBlogThis!Share to TwitterShare to FacebookShare to Pinterest
Labels: News