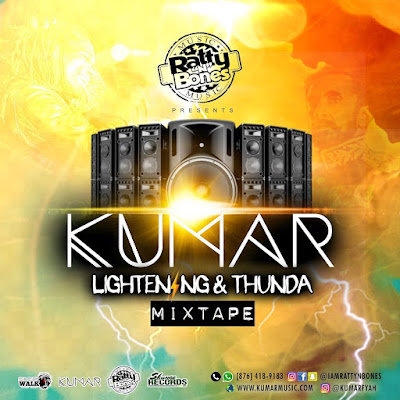 Its timely for multitalented artist Kumar to link up with RattynBonesMusic on yet another Culturally inspired musical creation Lightening and Thunda Mixtape packed with collaborations from Alborosie, Kenny Smith, Agent Sasco, and the ever vibrant Kabaka Pyramid.

The mixtape is well chopped with a series of intros and interludes. More sizzling are features of hit songs from the Kulture Walk album ,"Remember Me" now remixed, "Live another day", "Grain of Sand" also remixed, "Dry Bones" and some hot solo tracks released within the year, Time for Light and Sound.

Well if you are into feel good and culturally radiant music epitomed in the roots of spirituality, modest and upright living am sure you must have come across Kumar well if not, it's not too late to get acquainted to the Grammy Nominated Singer/songwriter with a message in your radio.

Kumar the Raging fire front man and St. Elizabeth native well known for his yardcore dub style and conscious hard hitting lyrics is glimpsing in the limelight after the successful release of the debut Album Kulture Walk earlier in the year as well as being featured on the VP Records Dancehall Anthems (a set of recordings that paints a portrait of classics of the golden era) which is quite exceptional giving reggae a sense of originality in these ever changing times.

"Love Overdue" is the jam a rendition of the cool ruler which is also featured in the mixtape. Well if you are a dub style music lover and yet to listen to the Kulture Walk Album well here is a treat the Lightening and Thunda Mixtape.

The story of Kumar is one of pure talent, compassionate worldview, ceaseless determination and exponential growth. It is about a voice that has inspired countless in his generation with messages of strength, redemption and universal love.
To listen to his songs is to be struck by his penchant for intense thoughtfulness in the fewest words.
Ever since his days as front man for Raging Fyah, his phenomenal songwriting and distinctive vocals have endeared him to lovers of life everywhere. In the process, he has earned grammy-nominated status and the opportunity to tour with the likes of UB40.
Follow Kumar:

Posted by Addiverbalist Kev at 09:09
Email ThisBlogThis!Share to TwitterShare to FacebookShare to Pinterest
Labels: Mixtape