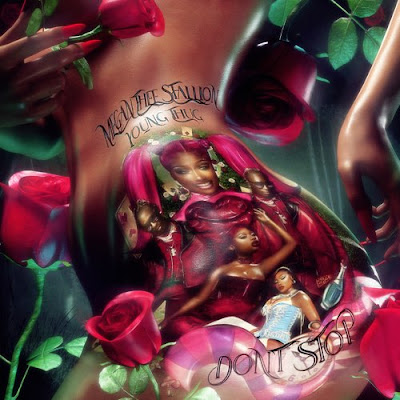 ‘Don’t Stop’ is produced by Buddah Bless, with the video directed by none other than Colin Tilley, the same director behind Megan and Cardi’s iconic ‘WAP’ music video. The video sees Megan and Young Thug in a world where the fantastical and peculiar collides with Megan’s signature Hot Girl style. Living in the land of surreal fairy tales, ‘Don’t Stop’ is the latest anthem from Megan Thee Stallion.

The release of ‘Don’t Stop’ precedes Megan’s Saturday Night Live musical guest performance alongside host Chris Rock airing 10/3, and follows her eight BET Hip Hop Award nominations this week, including Hip Hop Artist Of The Year, four E! People’s Choice Awards nominations, as well as a Top Rap Female Artist nomination at the Billboard Music Awards 2020. Additionally, Megan has been honored by TIME in the TIME100, its annual list of the 100 most influential people in the world.

With her killer flow, incendiary lyricism and jaw-dropping visuals, 2020 has indisputably been the year of Houston Hottie, Megan Thee Stallion. Beginning with the release of her most successful project so far, ‘Suga’, Megan garnered over 300 million streams on the project to date, also spawning ‘Savage’ - summer 2020’s most recognisable smash hit and the origin of the year’s biggest TikTok dance craze, the #SavageChallenge. The track also gave Megan Thee Stallion her first #1 hit on the Billboard Hot 200 alongside an irresistible remix with another Houston great, Beyoncé.

Most recently, Megan achieved her second global #1 of the year; a collaboration with female rap powerhouse Cardi B, ‘WAP’ in August 2020. Listed as the highest selling single in over a year, as well as the highest streaming debut week for any track since records began, ‘WAP’ drew over 93 million streams in its first 7 days and is already certified platinum. This is in addition to the track igniting conversation online, with Megan’s cultural currency and ability to dominate the zeitgeist at an all time high.

Posted by Addiverbalist Kev at 13:40
Email ThisBlogThis!Share to TwitterShare to FacebookShare to Pinterest
Labels: Music