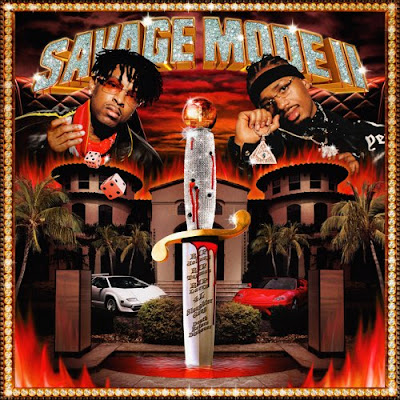 “Savage is defined as fierce, beastly, and untamed.” — Morgan Freeman

Atlanta superstars 21 Savage and Metro Boomin have joined forces to release Savage Mode II, the highly-anticipated sequel to their seminal Savage Mode collab project, released in 2016. In the four years that have transpired, despite 21 and Metro’s solo successes, fans never stopped clamoring for the return of Savage Mode. Today, the dynamic duo delivers.

The album arrives swiftly on the heels of the release of its artwork and trailer, the latter featuring narration from the almost-mythical Hollywood icon Morgan Freeman. The 80-second experience teased the “Savage Mode” world at a blitzing pace, a reminder of the cinematic atmosphere Metro and 21 often conjure when they get together.

The unveiling of the Savage Mode II cover created a moment of its own, featuring Savage and Metro paying homage to the “pen and pixel” graphic design style made famous by the inimitable late 90s and early 2000s run of dominant Southern-based record labels like Cash Money and No Limit. That said, the horrorcore theme that fans have come to expect from the duo remains seamlessly present. And with guest contributions coming only from fellow ATL rep Young Thug, they reprise their roles as the primary architects of the world that earned 21 Savage his first RIAA certification.

Back in 2016, when Savage Mode was released, Metro Boomin had already established himself as a bonafide star, thanks in large part to his work earlier that year with Kanye West on The Life Of Pablo. However 21 Savage, fresh off being named to the coveted XXL “Freshman” cover in 2016, was primed to burst onto the mainstream scene with vigor.

That he did, as he and Metro’s chemistry shined brightly that summer to the tune of a multi-platinum single—“X” featuring Future—and one of the more memorable mainstream debut campaigns of the decade.

Thus, 21 and Metro are back to recapture the energy. After setting things off with a bang this week, they’re set to paint fall red with their undeniable brand of sinister anthems and mind-numbing 808s. The duo is set to engage fans continuously after the release of the album in a series of unique D2C and digital campaigns sure to make Savage Mode II energy omnipresent this fourth quarter and beyond.

When these homegrown superstars collide, classics ensue. Savage Mode II is no different.

Posted by Addiverbalist Kev at 13:39
Email ThisBlogThis!Share to TwitterShare to FacebookShare to Pinterest
Labels: Album