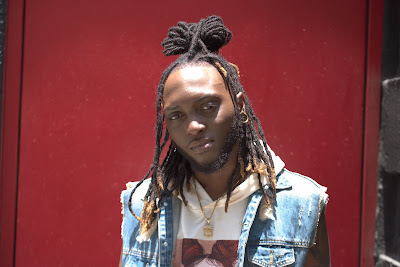 Confident, with a deceptively shy smile, an upbeat 23-year-old, Suwayne Ffrench, came into the world with a deep love for music but particularly, Dancehall. From performing at Golden Spring Primary School devotions to singing on the choir at Oberlin High, Drizl has always found release in expressing himself through music.

Growing up in the cool hills of Golden Spring, St. Andrew, he lived in a modest one room home with both parents and a younger sister. Drizl wears a myriad of unusual tattoos and piercings proudly. “I like what I like” he says with an undeniably self-assured gaze, “…and the ladies like it too”, he adds with a grin.

Today, his love for women – his Achilles’ heel and his passion – provides much of the inspiration for his music. With crisp, clear vocals, his effortless, rhythmic flow and the creative lyrical content of his songs, Drizl’s focus on love, passion and the women is sure to resonate with dancehall fans. As if on cue, Drizl released his lead track “Love It” on Valentine’s Day and terms the remarkably sexy dancehall track “bedroom music”.

Dance track “Whine!” was later released in April 2019 and “Beachfront” on August 30th on various digital platforms. His 7-track EP “Mood Swings” references the different elements of passion and love.

There are no “gun tunes” in the immediate future for the self-proclaimed sex-god. He quips, “Leave dem to talk ‘bout d badness, me waa fi talk ‘bout d ladies“.

The young artiste credits lyrical and rhythmic greats in the dancehall such as Vybz Kartel and Beenie man, the beat of the music being a key factor for him. Of his future in the dancehall he says,

His ultimate goal, still to provide a better life for himself and his family. This artiste’s undeniable talent and positive energy will only continue to open doors. The sky is only the beginning for Drizl.

“Mood Swings” was released on all digital platforms on Friday, September 27th and debuted at #9 on the Billboard Reggae Albums Chart and lasted 3 weeks in the top 20.

Posted by Addiverbalist Kev at 12:25
Email ThisBlogThis!Share to TwitterShare to FacebookShare to Pinterest
Labels: Biography