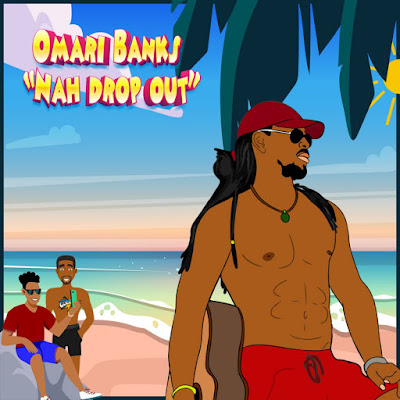 From socially charged tracks like "System Set" to serenades of "Naturally" and life's mantras like "Like A King", Omari Banks pride's himself in a diverse and multi-faceted discography that reflects every-day life.

On his latest offering, Omari teamed up with Jamaican multi-instrumentalist and producer Ottmar Campbell on "Nah Drop Out". Mixed by renowned engineer Shane Brown, the hit-bound track is a candid chant laid to a faster beat that Omari's hardcore fans might be used to, as it fuses reggae and dancehall. "I'm from the Caribbean, all those genres are inside of me. Reggae, Dancehall even Calypso run through my musical veins. Although I do more Roots, Reggae, Blues, Folk and Contemporary,  I appreciate it all and for this, I just wanted to do something different." said Omari.

Slated to be released on October 2nd alongside the colorful anticipated animated video, "Nah Drop Out" vocalizes a common tale "Watch di friend wah you keep, Some heart full with envy..." sings Omari as he discloses the song's inspiration. "I wrote the song like I do most of my tracks. I am someone that observes and draws from my life, or those around me. This song is a familiar experience, it's a shared thread that some of us have had. People close to us, even sometimes family that you believe are down for you, to cheer you on but just to realize that it's a facade."

With the track and video out now via ONErpm, "Nah Drop Out" can be strreamed at https://ps.onerpm.com/nahdropout via global distribution company ONErpm, a Distribution, label services, and rights management company.

"At six foot five, dark and handsome, with long dreadlocks and a cool Caribbean style, you can’t help but be drawn to Omari Banks, His music is dynamic and has many influences." -  Huffington Post
"Omari Banks, who commanded the stage with a Jimi Hendrix-reminiscent presence. Rocking a multicolored “Rolling Stones” cut-off tee, a bandana, leather pants and his signature dreads, Omari showed, in the revered words of Big Freedia, “He did not come to play — He came to slay.” - BET

"He’s got a voice as calming as chamomile and #charisma that bubbles like a champagne toast. He’s not just a dynamic performer, he writes and composes most of his own songs. Between his music and his magnetic mojo, one of #Anguilla’s most beloved talents has the makings of an international superstar". -  Vibe Magazine

Posted by Addiverbalist Kev at 12:53
Email ThisBlogThis!Share to TwitterShare to FacebookShare to Pinterest
Labels: Music