World Rebirth Riddim - See why the Riddim is getting rave reviews 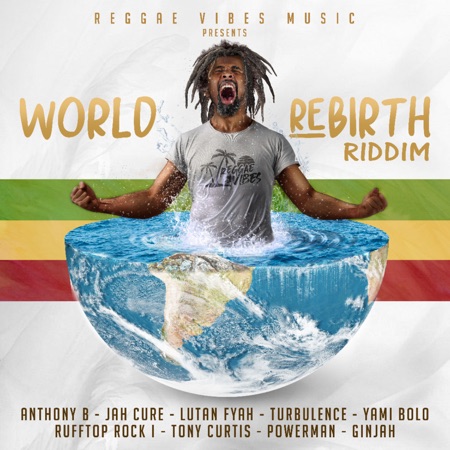 The ten (10) track project features new music from some of the most revered artists within the reggae industry: Anthony B, Jah Cure, Lutan Fyah, Turbulence, Yami Bolo, Rufftop Rock I, Tony Curtis, Powerman and Ginjah.

The tracks have been receiving rave reviews from listeners, tracks like Jah Cure's - Rock the Boat, Anthony B’s - Black and Proud, Turbulence's - A Tribute to Mama and Lutan Fyah's - Twitter Friend premiered on Reggaeville's Official  Youtube Channel and fans have been wilding out on the positive Vibe and message in the music.

The Riddim has also received massive Radio Airplay and DJ rotation across the globe from the Caribbean, to the EU, and the USA to Africa.

Those directly involved in the project are excited and have nothing but optimism for the "World Rebirth Riddim"; see quotes below.

“This song is for summer love,” said Jah Cure.

Ginjah: “The song is reality because someone took my diamond rings and chain and few other belongings. There is no room for sticky fingers around. I despise them.”

Lutan Fyah: "Notifications stimulate a lot of women. The serotonin pops like bubbles in their heads. Instagram, Snapchat, Tumblr, facebook.. They are in need of more happy chemicals to bring them higher than the follow count..... They can't live happy with just one “Like” In my experience i learn a lot about attention seekers on social media who always want to be seen. Incidentally that’s where lots of men find there wives".

True Vibes, It's a musical journey that every reggae listener should indulge and travel.

The album can be streamed at:http://smarturl.it/WorldRebirth

Reggae Vibes Music is a record label with offices in Atlanta, New York and Kingston. It has several productions in the Reggae and Dancehall genre that have been received well and featured on radio stations all over the world including Sirius XM, BBC Radio, and major stations worldwide. It has produced tracks from Internationally acclaimed artists such as Jah Cure, Sizzla Kalonji, Lutan Fyah, Mr. Vegas, Charlie Clips, Jahvillani, to name a few.

Posted by Addiverbalist Kev at 13:49
Email ThisBlogThis!Share to TwitterShare to FacebookShare to Pinterest
Labels: Reggae Riddim