Don Reid - I Know Who I Am (New Music Alert) 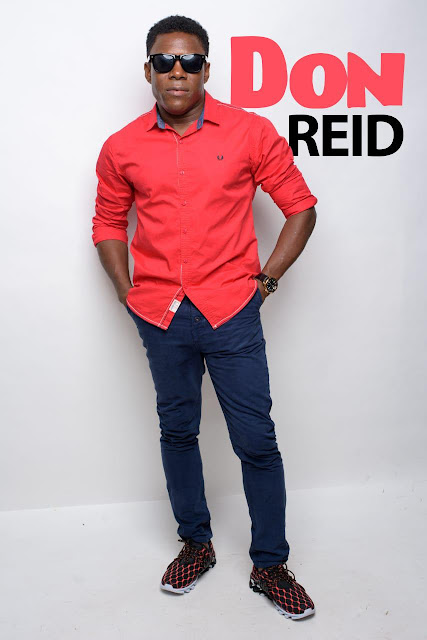 Don Reid
Donnovan Reid AKA “Don Reid” is a recording artiste, musician, songwriter, comedian, actor and Bank Manager. He was born in Kingston and raised in St. Ann Jamaica by a total stranger to whom Don was given away by his biological mother at age 2.
Through hard work and sheer desire to breakout of his impoverished situation, Don ascended through the ranks to the position of Bank Manager at Jamaica’s largest bank (NCB), where he has been since 16 years old straight after leaving high school. Don had a passion for the arts from a very early age, singing and deejaying at church and school functions, starring in major productions and writing his own songs in a songbook he kept. Throughout his banking career, the love of the arts remained close to his heart and, with the emergence of social media, started blogging and publishing his amateur musical recordings online which piqued the interest of social media users creating a host of loyal fans and followers.

In August 2018 he was hospitalized and immediately after being released, penned a song titled “Hospital Food”, a hilarious recount of his hospital experience which launched his career as a professional recording artiste. The single which was produced by highly acclaimed veteran producer Danny Browne, received much traction in the media and before long Don was performing on the island’s major television and radio stations and on road shows. He again teamed with Danny Browne to produce a follow up single “Courts”, which is a parody of “Toast” done by Grammy winning artiste Koffee. This single received even greater response earning him bookings for major local calendar events such as the Jamaica International Kite Festival, Powerful Men & Women Concert & Relay for Life. In 2019, he released over five additional new singles, (BUSS BIG, Rebel Salute, Hol Yuh Position, Jamaica & Chrismuss Time) went on a media promotional tour of New York City, New Jersey, Connecticut, and South Florida which was arranged by New York based Dave Rodney and Anthony Turner of Images LLC and which featured interviews and performances on major media platforms including Irie Jams Radio and Kool97 FM NY with Francine Chin of VP Records.

Don’s triumphant story of overcoming poverty, having grown up as an orphan and being on his own since age 17, is the essence of his latest single “I Know Who I Am” which was released in January 2020 along with a short film shot on location in his childhood town of Claremont St. Ann. The single and short film shares his very powerful and captivating story of the struggles he endured during his childhood and his resilience and determination in overcoming them to become the successful career banker he is today and emerging star in the very dynamic music industry. Don strongly believes that his setbacks and triumphs were designed to enable him to fulfill his divine purpose of inspiring millions of people over the globe who have or are facing similar experiences.

Don is the newest addition to the John John Music Group, who is now his exclusive management and booking agency. With caliber of well-established artistes such as Bugle, Tanya Stephens, Jahmiel, Shane-E in the John John camp, Don is expecting that this new engagement will enable him to breakthrough into the major overseas regions such as Europe, Africa, the United Kingdom and North America.  He is now working on releasing his first EP with 8 tracks titled “BoomShots”, and though a newcomer to the music industry, Don Reid believes he can deliver just as well as the veterans. His mission is to build a brand that receives the highest recognition possible locally and internationally and deliver great music with intelligent lyrics and excellent arrangements.
Don Reid - I Know Who I Am (Official Video)
Social Media:
INSTAGRAM:@don_reid1
FACEBOOK:@donreidshow
YOUTUBE:@DonreidVEVO
For Bookings : jjmusicgroup360@gmail.com
Posted by Addiverbalist Kev at 19:48
Email ThisBlogThis!Share to TwitterShare to FacebookShare to Pinterest
Labels: Biography, Music