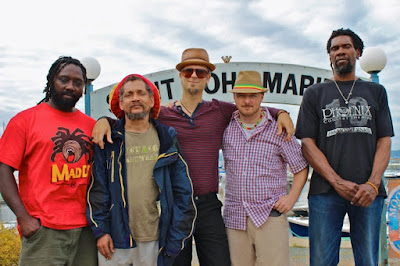 Based in Toronto and fronted by vocalist King Selah and drummer Jahlin Edwards with guitarists Terell Jarvis & Jay Cleary. bassist Jo John and keyboardists Dezi Fingazz & Sam Weller rounding out the modern incarnation of The Gang. The band takes its name from the House of David, an after-hours spot that was a hotspot for artists from the Toronto's burgeoning Rastafarian and reggae community from the late 80’s until the mid-90’s.

After a brief hiatus the band re-energized in 2004 with a revamped line-up, touring relentlessly in clubs & festivals, building a strong grassroots following across Canada.

After collaborations with over 20 musicians from Canada's reggae community, and with the wisdom of 20 years of songwriting, performing and recording, House of David Gang recently emerged from bass player/producer Snappy Homefry's Playhouse Studio, releasing their finest album to date "ReggaeWarrior" on NuFunk.ca Records.
Positive Vibrations!

"One of the most interesting reggae bands in the country"
- Matt Galloway, CBC Radio Host

"Irie classic reggae sound with uplifting lyrics. Ya mon! It gets my approval!"
- Carl Harvey, Producer/Guitarist for Toots & Maytals